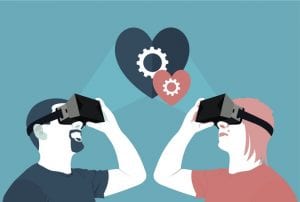 Blogging about The Prisoner the other day reminded me of a great episode of the cult series in which Patrick McGoohan finds himself playing a role as a gunslinging sheriff in a western. Watching a repeat of the series as a youngster in the 90s, I was totally thrown by the way the series removed the normal opening credits and plunged us into what was ostensibly a totally different genre. The only thing that linked us back to the show was the presence of McGoohan, but none of the series’ other hallmarks were present. I have even written a paper on this episode, entitled ‘Living in Harmony’, published in French in this volume.

Living in Harmony’s climatic moment comes, fittingly, with a showdown between the sheriff and his cowboy antagonists in a saloon bar. Ultimately he is outnumbered and, having taken a bullet, awakens to discover that the whole experience was some form of simulation. He is wearing a headset and his adversaries are revealed to be mere carboard cut-outs. Perhaps he has also been drugged in order to induce the fantasy: the wild west town of Harmony is revealed to be no more than a kind of film set and that he is still, of course, in The Village.

What interests me in the scene is its prescient engagement in virtual reality and genre experiment. It could also be a great way to engage students in a broader class discussion on virtual reality. It might more sense to run such a class shortly after the one on The Prisoner, so that students can link them together. Here is the clip:

The retro imagining of future technology put me in mind of a largely forgotten Christopher Walken film from the 1980s called Brainstorm, in which researchers develop the technology to record and relive memories, their own and other people’s, opening up the possibilities for many vicarious (or, indeed, virtual) pleasures. In the absence of a good scene to work with, I have used the film’s original trailer. Trailers offer lots of potential for language class as they suggest a narrative that students can complete themselves.

The goal is not to understand every shed of dialogue but to try and make sense of the overall story implied. Brainstorm is sufficiently obscure for the students not to have heard of it or already be aware of its premise. As the technology evoked is also very retro, there is potential in linking the two scenes together in a discussion about in what ways they anticipated the future and in what ways they have dated. Here is the Brainstorm trailer:

Watch the first 25″ of The Prisoner episode ‘Living in Harmony’ and ask students to make notes around basic gist questions:

Who? What? Where? Why?
What do you think will happen next?

Give students time to share observations with one another, then the whole class.

[Depending on the level, you might want to mute the dialogue]

Next, watch the clip to 58″ and ask students to make notes around basic gist questions:

What happened?
What do you think happens next?

Give students time to share observations with one another, then the whole class.

Finally, watch the rest of the clip and ask students to share their observations with another, then the class, eliciting as much vocabulary and ideas about virtual reality as possible.

Tell students they are going to watch a trailer and that they should take notes about their general observations (i.e., what? where? who? when? why? how? etc.). Show them the Brainstorm clip*.

Once the teacher has elicited their initial observations, the students can watch the trailer again. This time, tell them that they are going to write the film’s synopsis, based on their understanding of the premise. They are free to use their imagination so long as it corresponds more or less to the content of the trailer.

You could also ask the students to compare and contrast the two clips and the technology depicted. Which do they think is more convincing? Why?

[*For lower level groups, you could play the trailer muted first, or just a segment, before watching the whole clip with the sound on. The information in the trailer could be a bit dense otherwise.]

One suggestion for a follow-up or final activity to complete the sequence would be a debate on the ethics of “recording” memories to be relived as virtual reality. Two debating teams could be established for and against such a technology, and given time to prepare and develop their arguments.

Another possibility would be broader group discussions about virtual reality around a series of questions. Will people soon fall in love in the virtual world, as suggested in the picture at the top of this post? Do they do this already? If you could relive, through virtual reality, any memory from your life or that of anyone else’s, what would it be? etc.