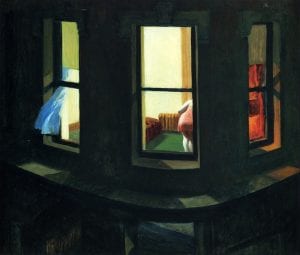 Following on from my previous post about The Prisoner, which evokes among other things the theme of surveillance, and the post about Brainstorm, which imagines a dystopian technology allowing users to vicariously experience other people’s memories, this class focuses on the subject of neighbourhood watch, privacy and voyeurism. The clips I have used that best elicit discussions on these themes are from one of the all-time greats, Hitchcock’s Rear Window.

The film explores the fine line between curiosity, concern and invasion of privacy, with plenty of potential for class discussions about issues related to surveillance, notions of neighbourliness and community, or debates around minding your own business and nosiness. These discussions have proven very rich where I teach today in France, where the idea of neighbourhood watch is a relatively new concept and not one many feel at ease with, and where informing on people (la délation) carries many pejorative connotations.

Show students Edward Hopper’s Night Windows, above, or else Avril Paton’s Windows in the West (below), or both. Get them to describe and react to the pictures in pairs/groups with some simple gist questions (what can you see? what do you think the painter wanted to convey? what do the two pictures have in common? in what way do they differ?), before asking volunteers to share their ideas, noting them down on the board (or projected word processing document, as you prefer). 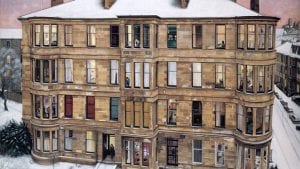 Watch the opening credits to Hitchcock’s Rear Window. Ask the students to make notes based on the following questions:

Describe the man (age, profession, current situation)
Where does he live (describe his surroundings)?
What do we learn about his neighbours?
When does the scene take place (period, season)?
What do you think happened to him?
What do you think will happen next and in the course of the film? Why?

Get the students to share their observations in pairs/small groups, then together with the whole class, noting down pertinent vocab for all to see.

Get the students to share their observations in pairs/small groups, then together with the whole class, noting down pertinent vocab for all to see.

There are many different directions in which you can take this, here are some suggestions: 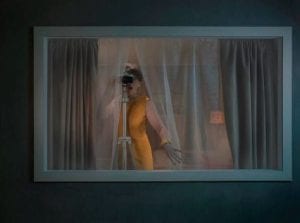 Depending on whether you prefer a task-based approach or a straight arrow ESA sequence, you could consider focusing on the following language points: