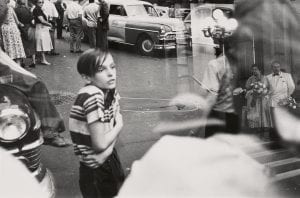 Film, music and photography-based ESL/EFL class about the stages of life

After my last – rather academic – post about Bladerunner and optical illusions, I thought a more lighthearted approach was in order today. Saying that, it begins with a corollary to that discussion, namely the photo above, Louis Faurer’s Accident New York City (1952), which is anything but lighthearted. As with in the scene featuring Deckard’s Esper machine, it is a photograph that keeps on giving, the reflection of what might be a storefront window affording a near panorama of simultaneous activity that seems to tell two or more stories.

For me the power of the photograph lies in its juxtaposition of different life stages: the death of the accident (seen in the ominous chalk lines and [blood?] stains on the road surface), childhood on the cusp of adolescence (the apparently traumatized central figure), and what could either be read as a wedding or a christening (the figures to the right). Whenever I have used this image with students they picked up on this unsual convergence quite quickly, so it seemed a stimulating starting point for a class about the different stages of life.

Ask students to look at and describe Louis Faurer’s picture in pairs or small groups. Simple question word prompts should suffice: what? where? when? who? how? why? etc.

Assuming that the students have already indentified the irony of the picture, its juxtaposition of life and death, tragedy and celebration, ask them to brainstorm the different stages of life (eliciting if possible ideas such as childhood, adulthood, birth, death, adolescence, pregnancy, marriage, old age, retirement etc.).

For the next activitiy I am indebted to Kieran Donaghy, whose excellent website Film English is a vital resource for anyone hoping to use video clips in their English classes. It is thanks to Kieran that I discovered this animated film A Single Life by Job, Joris & Marieke which fits the theme of life stages perfectly, and in the darkly comic way I love best. As Kieran’s website features a detailed plan on how to structure an activity around this clip, I won’t attempt to reinvent the wheel. Check out his lesson plan here. I have also included the full clip here:

As an alternative or additional activity focusing on the different stages of life, I suggest an activity based around Frank Sinatra’s It Was A Very Good Year. There are lots of ways to approach a listening exercise based around popular song, with some excellent articles on the subject (like this one).

I think it is important to let the students listen to the song first without any specific tasks except to respond to a few gist questions (e.g., What is the song about? How would you describe the mood? Make a note of any lyrics you understand).

Next you could give them a gap-fill exercise, either with or without the missing words provided separately (depending on the level of the group). Which words you choose to remove depend on what you want to focus on. You can find the lyrics online here. It seems logical to remove the different ages (“seventeen”, “twenty-one”, “thirty-five”) to practice listening for numbers. You might want to focus on rhyming words, or remove just some of them and see if the students can guess or remember them from the song without listening again straight away.

Some of the more difficult vocabulary (“fine old kegs”, “the brim to the dregs”, “blue-blooded girls”), you might want to introduce first through a matching activity (words to definitions), level-depending.

Finally, you can ask the students to discuss in groups the different life stages expressed in the song and Sinatra’s apparent feelings towards them in the present.

Personally, I like a good sing along in class, and students seem to enjoy it too (even adults!). If you working on prosody, you could get the students to mark the syllable stress first before singing.

As a follow-up, have students discuss the “very good years” of their life. Depending on the level of the group, you could ask them to do this informally, sharing their ideas with a partner or in small groups (before soliciting volunteers to offer their ideas in front of the whole group). You could also provide some questions on the subject for them to discuss in groups.

For a more challenging exercise, you could ask the students to do a couple of verses in the style of Frank Sinatra, respecting the number of syllables in each line and paying particular attention to syllable stress.