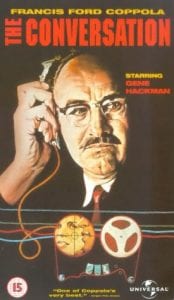 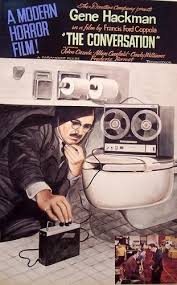 A companion piece to Antonioni‘s Blow-Up, or even Rear Window, Francis Ford Coppola’s Watergate-era surveillance thriller The Conversation (1974) may well be the director’s best film. A bold statement by a fan of the original Godfather films and Apocalypse Now, but Coppola’s self-proclaimed favourite strikes me now as the subtlest and most insidiously rewarding of his movies. Moreover, it is arguably the best of the Watergate inspired or themed movies, of which there was a glut in the mid 70s, including prestige productions such as The Paralax View and All The President’s Men.

Gene Hackman’s performance as surveillance expert Harry Caul is arguably a career best. As in Blow-Up, a film Coppola claims to be have been a guiding influence, Caul lets curiosity get the better of him and becomes drawn into a conspiracy to which he was initially supposed to be a neutral observer. Unlike in Blow-Up, there is less insinuation that the mystery could be in some way a manifestation of the hero’s own overactive curiosity, but the fact that his paranoia is justified does not make the film prosaic.

Rather, it is film of slow-burning terror and stalking oppression, with some memorable scenes of intense observation that echo the aforementioned classics, as well as the Esper machine sequence in Bladerunner. Unlike those other films, in The Conversation the onus is on the heard, rather than the seen, as Caul pieces together the dialogue that takes place between a young couple walking in a crowded and noisy San Francisco square, recorded covertly by at least three separate operatives including Harry himself.

The film’s power rests on the gradual revelation of the dialogue, its meaning and nuances, much of which occurs during scenes in which Harry Caul synchronizes the separate recording tracks and, through a variety of techniques, strips out the background noise that obscures the full meaning within. Not unlike a student of English confronted with a comprehension exercise, the spectator is only able to fully grasp the connotations of the eponymous conversation through repeated playbacks, rewinds and fast forwards.

The lesson sequence below hinges on these scenes, and the hope that the ambiguity of what we see will be rich in potential for student specuation, description and discussion. The first sequence here is particularly promising in that respect because it intercuts the scenes of Harry Caul in his studio editing the tapes with glimpses of the situation in which they were recorded: all being well the students will be able to piece together this jigsaw of sound and image through groupwork. The scenes should also work well as there is little dialogue but they are nevertheless suspenseful and ambiguous, affording the students space to hypothesise on what is going on.

Finally, the class has a general English interest but might also be appropriate in English language classes for students of other disciplines such as engineers or technicians. The focus might, for example, be on the technical processes shown, rather than the broader ethical and social concerns raised by the surveillance theme.

Show students the movie posters above. They can compare and contrast them, and predict what the film will be about. Perhaps you could ask them which they think is the most effective in publicity terms. I thought the one of Harry Caul crouching down by a toilet was funny and might at least grab the students’ attention, even if it appears to them ridiculous.

If you think the students will “cheat” and look up the synopsis themselves (which has happened to me!), you could edit the posters so that the title of the film is obscured.

Show students clip from about one minute onwards. Ask them to watch the clip and share their observations in small groups/pairs. For this general “gist” question prompts should suffice (what? where? when? why? who? how? etc.). As the scene is quite dense in information, you could play the clip twice – or firstly without the sound, then with it (which seems apt given the subject matter).

Once the students have had time to process the scene and discuss their ideas, get them to share their observations, noting relevant vocab so that everyone can see it.

Show the students the second clip, repeating the process. Ask them this time: why do you think the couple have been recorded and for whom? What do you think will happen next? Note down any dialogue you understand.

Show the students the second clip, repeating the process. Ask them first to watch the first 35 seconds and answer the following “gist” questions:

Watch the rest of the clip and answer the following “gist” questions:

What does he do next?
What happens?
What is his reaction?
What connection do you think this scene has to the others we watched?

As a follow-up you could do one or more of the following:

NB: Different groups could be given different projects, so as to avoid repetition.