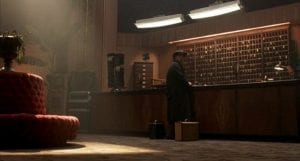 ESL/EFL lesson about hotel experiences, reservations and complaints, based on clips from the Coen Brothers’ Barton Fink

Barton Fink is a film situated at the beginning of what I think it is fair to call the Coen Brothers’ heydey in the 1990s, preceding as it does Fargo in 1996 and The Big Lebowski in 1998, a run interrupted only by the fine, but admittedly lesser work The Hudsucker Proxy in 1994. A satire of the Hollywood system in the 1940s,  it came out a year before Robert Altman’s more contemporaneous, multi-protagonist “comeback” movie The Player in 1992. I mention the latter as each film delves into the more soul-destroying undercurrents of Tinseltown with a metafictional twist: the eponymous playwright turned screenwriter in the Coen brothers movie and Tim Robbins’s studio mogul in The Player both – in their quest for Hollywood glory – seem to become literally authors of their own dramas.

In Barton Fink, the hero (played by John Turturro) makes Faustian compromises to overcome his writer’s block and produce winning material for the studio that has hired him on the back of his class-conscious Broadway plays. Ostensibly the weirder of the two movies, the Coen Brothers film features sequences of outlandish surrealism, notably those involving the occupant of the hotel room neighbouring Fink’s, which suggest a blurring of fantasy and reality in the mind of the hero himself.

In terms of how scenes from this film could be harnessed for communicative activities in the English classroom, there are several ways you can go about this. While the strangeness and ambiguity of the clips I have embedded here have clear potentiel for student discussion and speculation, they could also be used as the basis for something more prosaic: namely a class about hotels (checking in and making complaints). It is a theme I have had to cover many times in class in different contexts and for different levels, and bringing some of the Coen Brothers’ visual mastery to the proceedings is the perfect way to jazz things up.

To get the ball rolling, you could show the students the above still of Barton Fink waiting in the hotel lobby. You could ask them some simple gist questions to discuss in pairs or small groups (where? when? who? What atmosphere does the image evoke for you?), before soliciting reactions from the whole group and noting down vocab for all to see. Hopefully it will be readily apparent to students that the image shows a hotel and that there is a lonely and/or eerie and abandoned feeling to the shot, as the man waits at a spacious but old-fashioned and conspicuously deserted reception.

To build on the vocab and ideas from the warm-up, show students the following short clip, once again asking them to share their observations in small groups around simple questions (who do you think the man is? why do you think he is at the hotel? how would you describe the hotel?). Again, the students will no doubt pick up on the uneasy and offbeat vibes emanating from the scene.

As a follow-up, ask the students to imagine and role-play the dialogue that subsequently takes place between the main character and the hotel receptionist Chet (played by Steve Buscemi). Given the surreal nature of the scene, they can use their imagination to play around with this. Depending on the level, you might need to do some brainstorming and boardwork to address relevant structures and expressions for this context, but it might be interesting to let the students have a try first and see what language issues arise.

Tell the students you are going to show them two more clips and that they are to once again share their observations in small groups, then as a whole class. Stop the second clip at approximately 2’18”, at the moment Barton Fink picks up the telephone. To orientate their observations, tell them to focus on the following:

Assuming the students have predicted correctly that the main character is going to call the reception desk to complain (if not, elicit it), get them once again to imagine and role-play the dialogue, addressing any language issues that might arise afterwards, level-depending.

Finally, play the rest of the scene and the students can compare their complaints with that of Barton Fink. Get them also to describe together the remainder of the clip:

You could do one or more of the follow-up activities below: