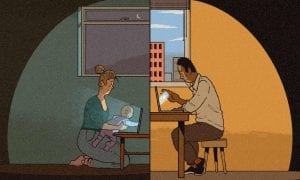 There have been some great class ideas around the theme of toxic masculinity and the infamous Gillette advert. I want to steer away from the #MeToo debate for now although this post could certainly tie in with that theme, notably as the “Best a Man Can Be” advert hones in on notions of fatherhood, be they outmoded or even “toxic”.

For me, the theme of fatherhood is an excuse to play students a song I have long wanted to use in class, Color Him Father. It was originally recorded by The Winstons in 1969 and describes a father-son relationship. There are a number of other recordings of this song but the one I like the best is Linda Martell’s country-soul version of the same year which changes the complexion of the tune – especially as concerns issues of masculinity – by telling the story from a female perspective.

The song is great as it describes a number of cliché gender roles (notably the father figure as breadwinner and educator) before its big and poignant “twist”, namely that the man the narrator refers to is in fact her stepdad, her real father having been “killed in the war”. The expression ‘color him father’ then takes on a different, erm, hue, as the song ultimately describes the acceptance of someone new despite the loss of a loved one.

To add a bit of variety to the sequence I have started it with another poignant cartoon I saw in a newspaper recently (but whose artist I can no longer recall or trace), which evokes a rather modern vision of fatherhood (and motherhood too). Furthermore, I have worked in a clip from Charlie Chaplin’s classic The Kid (1921), in which the legendary silent film comic portrays the ultimate irresponsible adult to the eponymous child, played by Jackie Coogan. Chaplin’s films work brilliantly in the EFL classroom, as the humour is universal, and there is little or no dialogue, allowing ample opportunity for student description and discussion. No doubt I will come back to Chaplin’s work in future posts.

Show students the picture and get them to describe the image above in pairs. Simple question prompts should suffice, for example:

Once students have had time to share ideas, solicit suggestions from the whole group, noting down pertinent vocab for all to see.

If not already mentioned, elicit the word ‘Fatherhood’, then get the students to brainstorm words and feelings around this subject.

There are a couple of great scenes from Chaplin’s The Kid you can use to evoke more ideas about Fatherhood. You can use one or both.

Show the students the first clip until 15 seconds approx. Ask students to share their observations in small groups/pairs around the following question prompts:

Have students share their observations with the whole class, noting down pertinent vocab for all to see.

Play the rest of the clip repeat the exercise around the following prompts:

Show the students the second clip until 35 seconds approx., and ask them to describe and discuss in pairs what they saw. Simple gist questions should suffice (what happens? where does the scene take place? who are the characters? what do you think happens next?).

Once the students have shared their ideas with the whole class, and relevant vocab noted for all to see, continue the clip until about 3 minutes. Get the students to watch and discuss the following questions with a partner:

Firstly, give students the title and ask them to predict, in pairs, what they think the song is about.

Next, after getting students to share their ideas, play the song once without any particular task to do. Afterwards, they can discuss what they understood about the song’s lyrics and story, and how the song made them feel.

Next, you could do a gap-fill exercise with the song. You could choose to make the words available to them separately or not, depending on the level of the group. Another possibility is cutting up the lyrics and letting the students rearrange them as they listen, or from memory. If you do a gap-fill, the words you choose to remove rhyming words, which could be a point of interest as some do not actually rhyme (grin/again, war/far). Indeed, you could ask students to find those that don’t.

After the listening comprehension, you could get students to discuss the lyrics in groups, particularly the story the song tells.

Here are the lyrics:

There’s a man at my house, he’s so big and strong

He goes to work each day, and he stays all day long

He comes home each night looking tired and beat

Never a frown, always a smile

I think I’ll color him father

He says education is the thing to complete

Because without it, life just ain’t very sweet

I love this man and I don’t know why

I think I’ll color him father

I’ve got to color him father

Our real old man, he got killed in the war

She said she thought she could never love again

And then there he stood with that big wide grin

He married my mother and he took us in

I’ve got to color this man father

I’ve got to color him father

NB: if you search for the song lyrics on Google, most of the time you get those of the original Winstons version of the song, which are slightly different. To the best of my knowledge, these are the words to the Linda Martell version.

Here are some suggestions for follow-up activities: