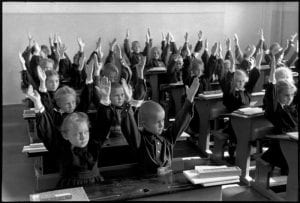 Writing about Walkabout the other day got me thinking about another theme that normally inspires debate in the English classroom, that of school uniforms and, more broadly, what constitutes a uniform or uniformity more broadly in society. The first clip from my Walkabout-themed lesson plan is particularly evocative in this regard, framing the school uniform as just one form of costume in a vision of Western society that is highly prescriptive and regimented: we see not only the blazered boys and girls at school but marching soldiers and besuited office workers all busying about as if in rhythmic unison.

To expand upon this theme – which wasn’t the endgame for the lesson plan based on Nick Roeg’s unsettling movie – I have brought together a couple of other movie clips that express uniformity in rather different ways, with potential for contrast and comparison. The first is from Terence Davies’s elegaic work The Long Day Closes (1992), which portrays the life of a schoolboy in working-class 1950s Liverpool not through the kitchen sink aesthetic of Ken Loach or other post-war gritty realists but with a wide-eyed nostalgia and stately grandeur.

The clip depicts a community fixed around different forms of congregation (school, church and cinema) in way that might have been handled cynically: it is, after all, quite a narrow view of a society and its rituals. Instead, the scene is given a grace and wonder thanks in part to its elegant aerial shot and whimsical music.

Thinking about clips with which Terence Davies’s striking piece could be contrasted, I recalled a film I hadn’t seen since I was at university, Ron Fricke’s Baraka (1992), co-incidentally released the same year. Back in my misspent student days, this non-narrative piece, which makes productive use of slow-motion and time-lapse photography, might have provided accompanying imagery while listening to The Dark Side of the Moon or Aphex Twin’s Selected Ambient Works with my mates.

The film hovers over many landscapes and cultures like a cinematic Yann Arthus-Bertrand, revealing the pulsating rythms and repetitions of not only societies but nature itself. Unlike The Long Day Closes, the perspective of the film is a global one and not exactly nostalgic, but sometimes its politics (as evidenced in the clip below) are more overt, presciently critiquing the unsustainability of consumer society and automation.

To get the students thinking and talking about uniformity, you could show them the Henri Cartier-Bresson photograph School children, Moscow, USSR (1954) and ask them to describe the picture in small groups/pairs, how it makes them feel, and what the photographer was trying to communicate through the image. Alternatively, depending on the class level and/or age group, you could give them the title first and ask them to predict what the photo will be like. Given Western notions of the USSR it is likely they will evoke ideas related to uniforms and uniformity, which may enrich discussions about images of the capitalist societies in the film clips later. Once they have shared their ideas together, solicit suggestions from the whole class, noting down relevant/useful vocab for all to see.

To follow-up on the Cartier-Bresson photo, have the students brainstorm uniforms and uniformity, asking them what comes into their minds when they see these words, and why.

Show them the first 15 seconds of the clip from The Long Day Closes, stopping at the moment when the schoolboy raises his arms. Have the groups/pairs discuss the following questions in pairs, before soliciting suggestions from the whole group.

Once complete, play the rest of the clip, asking them to focus and make notes on the following:

Once the students have shared their ideas with each other, and then the whole class, tell them they are going to watch a second clip. Show them the clip from 30 seconds to 5’30” approx. (this is already long enough). Get them to make notes around the following prompts: What, where, when, why, how, who?

Once students have shared their observations with each other, then with the whole group, get them to compare and contrast the two clips, focusing on the following:

You could choose one or more theses follow-up activities: