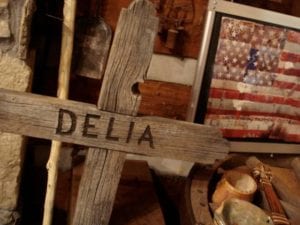 One of my favourite bands of recent years is New Orleans’ improbably-named Hurray for the Riff Raff, centred around the singular talents of singer Alynda Segarra, who was brought up in the Bronx of Puerto Rican heritage. The band has expanded beyond its Americana roots but my favourite track of theirs is The Body Electric, a country-folk number that seems to tell the story of a woman’s murder, and the recovery of the body by a female friend, relative or same-sex lover. The timing of this post is also apposite as today is International Women’s Day.

Closer examination of the lyrics reveals a reference to the traditional American song “Delia’s Gone”, based on the true story of the murder of Delia Green at the turn of the 20th century, versions of which date back to the 1920s. One particular interpretation of this archetypal murder ballad was popularized by Johnny Cash, who first played it in the 1960s but revived it again with his 1994 comeback album American Recordings, with an accompanying video in a gothic style featuring a very young Kate Moss.

Johnny Cash songs work very well in the ELT classroom as they are relatively easy to understand and often narrative-based, allowing lots of possibility for discussion. The Man in Black also was a committed social reformer on a range of issues, notably the condition of US prisons, a theme to which we will hopefully return. That side of Cash might seem less obvious on “Delia’s Gone”, which describes the brutal murder of the narrator’s “woman” on the basis that she is “triflin'” and “mean”.

It is to the murder ballad that Hurray for the Riff Raff and Alynda Segarra respond with the ambiguously-titled “The Body Electric”, where she plaintively questions the “whole world” singing a song about the murder of a woman “like there’s nothing going wrong”. The song deconstructs some of the violent imagery at the heart of the American songbook, questioning what “a man with a rifle in his hand” can do for a “world that’s so sick and sad”. Both a critique of violence against women and, more broadly, gun crime, it seems to pass from a first person narrative to the third, telling the story of a murder from the perspective of the victim and that of someone recovering the body, and act expressed as “settling the score” in a music genre too comfortable with images of violence on women.

Even more promisingly for the English language classroom, both songs have striking accompanying videos which can be exploited. For his 1994 version of Delia’s Gone, Cash opts for somewhat tongue-in-cheek gothic imagery, doubling-down on the motif of haunting in the song. Hurray for the Riff Raff’s video by contrast is more ambiguous, a shower of bullet casings seen pouring in reverse from the cradling arms of a mother, as if to imply a rebirth for the victims of gun violence. I have suggested using the Cash video first without the sound, but The Body Electric song without the imagery, at least on first listen, but you might want to switch things round.

There are different ways to go about this. You could try a brainstorm on country and western music, which could lead (with a little eliciting) to the Western genre more generally, and the violent imagery therein. Otherwise you could ask the students if they know what a “murder ballad” is, or if they can imagine what such a song might be like and give some potential examples. Although not strictly a ballad, students might be familiar with “Hey Joe” through Jimmy Hendrix, if the students need some encouragement.

Show them the video of “Delia’s Gone” without the sound. It is only a short song so it shouldn’t bore them too much to watch the video on mute. Ask students to describe the imagery (i.e., who do we see? what happens? is there a story? where does the scene take place?) and atmosphere. They can also predict what kind of song/music it might be. Have students share their responses in small groups/pairs before soliciting ideas from the whole group, noting down salient vocab for all to see.

Next, play the video with the song. Get students to listen with simple instructions, i.e:

Once students have shared their impressions with each other and the whole class, give them a gap-fill of the lyrics. You can decide what lyrics to remove, but I would probably choose rhyming words.

Finally, have them discuss the lyrics in pairs/small groups:

If you feel it is appropriate you could listen to the song one more time and have the students sing along!

Tell the students they are going to listen to a murder ballad, this time without the video. Ask them to listen and make notes:

Once the students have shared their impressions with each other, then the whole class, give them a gap-fill of the lyrics, removing words as appropriate (rhyming words work well for me). As the vocab is more difficult than in the Cash song, you could introduce some of the vocab first – level-depending – through a short matching exercise (words to definitions).

Have students compare answers before reviewing the correct missing words, and then have them discuss the lyrics in small groups/pairs, before opening up the discussion to the whole class:

As a follow-up task you could ask students to imagine and present their own video to this song. They could even prepare a story board to show what imagery they would use with what verse. Once complete, you could compare their ideas to the original video. When watching the video, you could ask them to:

Don’t forget to listen one more time and have students sing along!

You could do one or more of the suggested follow-up activities: