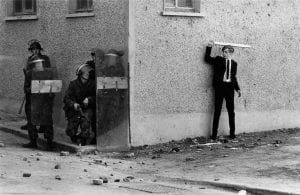 ESL/EFL lesson plan on the theme of rebellion and rebel uniforms including cinema, photography and music

There is an exhibition on at Tate Britain that I am currently missing. No doubt I will keep on missing it, regretfully, until the end of its run on May 6th, being unable to tear myself away from work and family life in France. My Dad did, however, get to go, and gives it a resounding thumbs up. It is a retrospective of the work of photojournalist Don McCullin, taking in a lifetime’s work on the frontline of many struggles, whether they be overseas wars or studies of homelessness back home in the UK. Many will be familiar, like perhaps the image above of unrest on the Bogside area of Londonderry, which is not alone among McCullin’s work in the way that it captures something absurd or even funny among the chaos and the fury.

McCullin’s photo above also got me thinking again about uniforms, the subject of a recent post. It is not untopical either, given the way that current unrest in France has its own costume identity; not only the gilet jaunes/yellow vests themselves but also a counter movement named foulards rouges (red scarves), not to mention the ‘black bloc’ anarchists and the heavy armour of the French riot police. One image from earlier on in the current spell of protests was this astonishing Paris Match photo of an eyeball-to-eyeball face-off between a heavily-armed female police office and a bare-breasted, body-painted, protestor-cum-performance artist donning the persona of Marianne, the national symbol of French liberty. 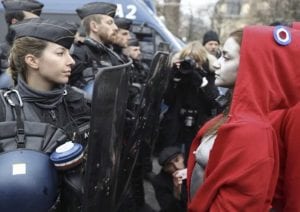 It is an image of which Don McCullin would no doubt have been proud, and one that recalls another iconic photograph from an event that defines a period of British social conflict: The Battle of Orgreave. This image, by The Guardian’s late photojournalist Don McPhee, pits a striking minor wearing a toy police hat facing off against policemen sent to break the picket lines at the British Steel Corporation coking plant in Orgreave, Rotherham, South Yorkshire. What ensued of course was one of the most violent confrontations in British industrial history, but here we are frozen at a moment just prior to the carnage that would follow. It is almost like boxers squaring up at weigh-in, sizing each other up with grudging respect. 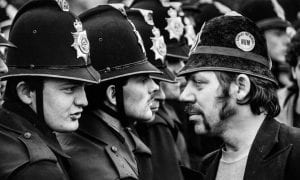 I think the images work very well together as a warm-up. To develop the theme and vocabulary a bit I have added a clip from Jim Sheridan’s In the Name of the Father, which depicts events not dissimilar to those shown in Don McCullin’s photograph at the top. Daniel Day Lewis plays a petty criminal who goes on to become one of the Guildford Four, falsely accused of the 1974 IRA pub bombings in the Surrey town. It is, frankly, an exhilirating sequence, showing how rapidly tensions between republican communities and British security forces could degenerate. It is given an extra shot of adrenaline curtesy of Jimi Hendrix’s “Voodoo Chile”, reinforcing the link between rebellion and rock ‘n roll.

To complete the sequence I have added a song by Lee Hazlewood called “The Troublemaker”. It is not one of Lee’s finest – it is not like the extraordinary “Some Velvet Morning“, for example – but it playfully, through its final twist, questions the conservative perception of late 60s protestors. Depicting a man whose “hair was much too long” and who “has rejected the establishment”, and would rather “wear his sandals and his flowers”, the song takes a final turn by implying the subject of the lyrics is not in fact a hippy protestor but Jesus Christ. As in the Jim Sheridan film, the costume of the rebel is very much a product of the time: the hippie look, essentially. The song has particular resonance because Hazlewood fled to Scandinavia at the height of the Vietnam war so that his son could avoid the draft. It is thus a protest song, with potentials for linking up the sequence below to my previous post about John Lennon’s Imagine and Steely Dan’s ruthless riposte.

First off, you could write “rebel” on the board, and ask students to discuss what a rebel looks like.

Next, to get some rebel vocabulary flowing, I recommend a compare and contrast of the aforementioned photos. Here they are again together.

Here are some brainstorming suggestions:

Have students discuss in pairs or small groups, before soliciting suggestions from the whole class, noting down any relevant vocab for all to see. For the interest of later discussions, try to elicit from the idea of uniforms and costumes (if they don’t come up with it themselves).

You could further the discussion with some historical context. What do they know about the social movements shown? What other social movements are happening in the world today or have happened in their lifetime?

Have the students watch the first 45 seconds of the clip and ask them to make notes on what they see:

Depending on the level, you might want to play this first fragment without the sound, as the explanatory voiceover might prove difficult and frustrate them. Otherwise you could play it once without sound, then a second time with the voiceover, and ask them to make notes about what they understand.

Allow students time to share their obervations in pairs/small groups, before holding a plenary discussion and noting down useful vocab for all to see.

Play the rest of the clip and ask the students to make notes on the following:

Allow students time to share their obervations in pairs/small groups, before holding a plenary discussion and noting down useful vocab for all to see.

Next, have them listen to the song once, before discussing with a partner the following:

Afterwards you could do a gap-fill exercise, with or without the missing words available to the students (level depending). Alternatively, you could cut the lines into strips and have students reassemble them, during or after listening. Personally, I would remove words related to the same lexical field (establishment, mob, trouble-making, disrespectful etc.), but you might want to choose a different approach. Here are the lyrics – as far as I know they are not reproduced anywhere else online:

Finally, have students discuss the song:

If the students do not realize the troublemaker is actually Jesus, and that the song is an ironic take on conservative attitudes towards the late 60s counter-culture, then try to elicit it!

You could do one or more of the follow-up activities: