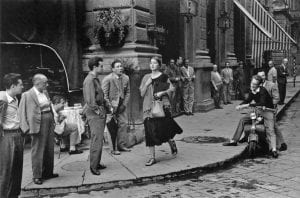 Following my post touching on toxic masculinity – an expression I don’t care for particularly but a topical one – and this one on murder ballads, I have been thinking of a few songs that respond to one another around the theme of gender politics. Rather than a structured lesson plan, I have just sketched a few ideas about the songs’ potential in class, thematically and linguistically. It is also the right moment to introduce a photo of which I am particularly fond, Ruth Orkin’s American Girl in Italy (above), one of a series featuring Ninalee Allen Craig – who died at 90 in May last year – on her adventures in post-war Europe.

On one level, the photograph evokes many things that women rightly complain about, and has great potential as the focus of a warm-up on sexual politics. Yet it would be churlish to ignore the amusing painterly qualities of the image and the backstory that made it happen. Craig insisted that she never felt harrassed in Europe and enjoyed the attention. Allegedly she met fellow American Orkin on her trip; both of them were travelling alone, rare for young women at that time. Having received plenty of attention at a particular street corner in Italy, Craig and Orkin resolved for Craig to walk around the block a second time. On what Craig later described as a “photographic lark”, she “clutched at herself and looked terribly frightened” – even though she was apparently anything but – her new friend ready to photograph the scene at the opportune moment.

It is an iconic image and one that would work well as a warm-up to a class based around the songs below. I have left it quite open: how you could approach these songs is entirely up to you. There is plenty online about how to structure activities around songs so I won’t rehearse that again here. As an alternative to teacher-led activities you could split the class into four groups and have the students develop their own learning activities for the rest of the group (with a little guidance), before presenting their own interpretations of the songs.

The Rolling Stones versus Nancy Sinatra

Two songs that I think would complement each other and extend any class around the theme of toxic masculinity are The Rolling Stones’ “Under My Thumb” and Nancy Sinatra’s “These Boots are Made for Walkin'”, written by Lee Hazlewood. The Stones track, still so groovy, definitely qualifies as politically incorrect by today’s standards, despite some admirable attempts to intepret the lyrics to the contrary. The song has a particular resonance for me: I have a funny memory of being played the track loudly by a friend at university who was accusing me of being under my then-girlfriend’s thumb. The song plays out as a battle of wills between Jagger and his “girl”, with the singer proudly describing the latter’s submission: how she only talks “when she’s spoken to”, whereas she once “once pushed me around”.

A great track one could use to contrast with the Stones track is Nancy Sinatra’s “These Boots …”. Perhaps the more tongue-in-cheek of the two songs, it is a bold and sassy number. Lee Hazlewood originally wrote it for himself but Sinatra, his collaborator on so many great songs, made it a hit, although she allegedly came to regret its aggressive lyrics. It is probably a good thing Hazlewood did not sing it himself, given that it ostensibly describes threats to a lover who has been “‘messin’ where you shouldn’t ‘ve been a’messin'” with all manner of violence, from the eponymous stomping to insinuations about having “a brand new box of matches”. Sung by a woman and released the same year, 1966, as the Stones track, the song takes on a different, rather girl-power complexion, aided its brassy production and Hazlewood’s psychedelic cowboy schtick.

As concerns language focus, there are several things the songs have in common that stand out, notably the use of prepositions and phrasal verbs (“It’s down to me”, “She’s under my thumb”, “these boots are gonna walk all over you“), idioms and proverbs (a variation on “every dog has its day” in the Stones track, “you keep thinking that you’ll never get burnt” in These Boots …). There is also a fair amount of authentic slang to analyse, from the garden variety (“ain’t it the truth babe?”), to the innovative (“You keep lyin’ when you oughta be truthin’ / You keep samin’ when you oughta be a’changin'”). All in all, there is plenty to keep the students busy linguistically and thematically, with interesting comparisons to be made in terms of style and message.

Nancy Sinatra versus The Crystals

Another song pairing that might prove productive in class in relation to this theme is Nancy Sinatra’s “Bang Bang”, also from 1966, and The Crystals’ notorious “He Hit Me” (1963). The latter is ostensibly the least politically-correct track of the four, even though it was apparently written as a critique of domestic violence by songwriters Carol King and Gerry Goffin, after discovering their teenage babysitter was being abused by her boyfriend. This message does not really communicate in The Crystals’ version, Phil Spector’s languid production seemingly in stark contrast to the brutality of the situation described. It enjoyed some initial chart success and radio play before an inevitable backlash, although the song has been recuperated more recently by indie experimentalists Grizzly Bear, with male vocals. Incidentally Phil Spector, pioneer of the Wall of Sound, is currently serving a life sentence for the murder of actress and model Lana Jean Clarkson.

Nancy Sinatra’s “Bang Bang”, given a memorable role in Quentin Tarantino’s Kill Bill saga, might seem a perverse extension of the same ethos, or at the very least a sinister murder ballad. Closer inspection reveals the song to be about something rather different, describing the relationship between the singer and a childhood sweetheart with whom she used to ride “on horses made of sticks” when “I was five and he was six”. The eponymous “bang bang”, the “awful sound” which causes her to “fall to the ground” is just play acting, although the couple seem to reunite in later life before the narrator is jilted, perhaps at the altar. The shooting down of the narrator thus finally comes to represent her rejection and resulting heartbreak.

Again, notwithstanding the appalling sentiments of the Crystals track, there’s lots of potential in terms of language focus, from simple past irregular verbs (“hit”, “felt”, “told”, “knew”) coupled with the past perfect (“I had been untrue” / “I’d been with someone new”) to modals in the past (“I could have never made him mad”) and present (“He couldn’t stand to hear me say”). In “Bang Bang” we also find plenty of examples of irregular verbs in the simple past, “hit” (again), “rode”, “shot” and “came”. Furthermore, we find – as in Tar & Cement and It was a Very Good Year – the use of “would” and “used to” in order to articulate habits in the past (“He would always laugh and say / Remember when we used to play?”). Lots to explore, but without neglecting the potential of the thematic twist, that the song is not about murder at all but heartbreak and rejection.

Depending on how you approached this, you could do one of the following: