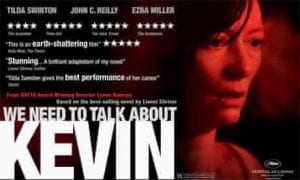 Following my recent post about fatherhood, one of the most striking and memorable depictions of motherhood I have seen in the cinema in recent years is that played by Tilda Swinton – in Lynne Ramsay’s 2011 adaptation of Lionel Shriver’s epistolary novel We Need to Talk about Kevin. Ramsay brings her impressionistic signature style – honed on breakthrough works like Morvern Callar (2002) – to the source material, a disturbing and topical story of a mother’s attempts to understand what led her son to commit a horrendous high school massacre.

While the novel’s progressive revelation is rendered through a succession of conspicuously unanswered letters, the Scottish filmmaker takes a non-linear approach, with its fragmented and elliptical structure affording plenty of opportunity for audience (and student) speculation. Ramsay is also a director who works in a pallette of deep reds, as evidenced in the poster above, and she really goes to town on We Need to Talk about Kevin, the eponymous killer’s mother struggling with the notion she too has blood on her hands.

The clips I have chosen showcase Ramsay’s talents for disjointed and expressive filmmaking. Virtually free of dialogue and rife with suggestive imagery, they should prove rich in student speculation and description, before the final “reveal” moves us onto the more tangible horrors of the world today. If there is a canon of films about high school massacres, then another entry must surely be Gus Van Sant’s Elephant, loosely based on the mass shooting at Columbine in 1999 – in many ways a watershed moment in indiscriminate mass murder in the US and beyond. The onus here is on comparing two styles – Ramsay’s impressionism with Van Sant’s oddly dreamy realism – so as to build vocabulary and engage students on a topic that cannot fail to arouse interest.

As the theme for this class is revealed (as in the Ramsay film) progressively, you don’t want to give too much away at the warm-up stage. To keep things open but get the students to start thinking in the right direction (if you can say such a thing), you could get students in pairs or small groups to brainstorm around the theme of “motherhood” or even “mothers and sons”.

Tell students that they are going to watch a film clip and describe the imagery in small groups/pairs, focusing in particular on the following points (you might want to skip the film title if you feel it gives too much away):

Give the students time to share their ideas before soliciting suggestions from the whole class, noting down useful vocab for all to see.

Repeat the exercise with the second clip below, getting them to describe in detail the scene, focusing in particular on the following questions:

Repeat the exercise with the final clip, getting students to describe the scene focusing in particular on the following:

Hopefully by the end of this third phase the students will have worked out the full horror of the mother’s situation, and the Kevin’s appalling act, without having to show anything more explicit from the film (in fact, the murders are not shown in grisly detail, and Kevin’s choice of weapon is anything but “conventional”). If not, a little further eliciting might be necessary before we move on to the next clip.

Tell the students they are going to watch a clip from a different film with a related theme, Gus Van Sant’s Elephant (2003). Depending on how much time you have you could choose one or two extracts from the clip below, a compilation of scenes from the film that someone has put together and posted on youtube. What interests me is the contrast in styles between Ramsay’s overtly impressionistic visuals and the low-key, but still oddly offbeat naturalism of the earlier film.

Have the students watch the extract and describe what they see, focusing on:

Here are some suggestions for follow-up tasks (you could give different tasks to different groups):