Communicative English class on the theme of airports and flying, based around photography and film clips

I teach a lot of business English and often find myself doing lessons about air travel. At the university where I work in France, I also do a lot of general English conversation classes and it is a theme that is often requested. Frequently in the past I have opted for bog-standard lesson plans found online or from a student manual but I have got bored of doing this and wanted to do something more student-led, based around film and photography.

Airports and planes are fascinating places – or, rather non-places – as social anthropologist Marc Augé defined them: anonymous, transient, impersonal. They have been the subject of some of the wittiest photographers, from Martin Parr, whose image above seems to capture some of the stress and uncertainty of airports, to William Egglestone, whose “En Route to New Orleans”, below, seems to hark back to a golden age of air travel, when flying might have had a thrill of glamour and adventure to it. I think that most agree this is no longer the case, which is why I think a comparison of the two images would work as a nice warm-up on the subject. 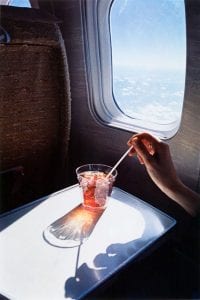 I wanted to find some contrasting film clips that also expressed some of the contradictions inherent to the flying experience, and that would help students build a set of vocabularies around the theme. There are countless movies with airport or in-flight scenes, even films that take place entirely within airports, so my choices may appear a little random at first. The movie that came to my mind first, particuarly as concerns airport security – evidently the least pleasant part of getting a flight today – is Alan Parker’s Midnight Express (1978), based on Billy Hayes’s true-life experience of being caught smuggling hashish out of Turkey.

It is a nerve-racking scene, in which Hayes – played by Brad Davis – initially seems to have made it through what was then a much less sophisticated security apparatus, despite looking and acting decidedly nervous. His luck runs out, of course, on the runway tarmac, in rather spectacular fashion. Notwithstanding the drug smuggling plot, the scenes seem to capture something of the anxieties attending air travel, albeit in the most extreme way.

A great contrast to Midnight Express is a film I have not yet scene, but clips of which I discovered on Youtube and seem to contrast perfectly those of the Alan Parker film. Up in the Air (2009), starring an unflappable George Clooney, presents a man apparently in his essence when travelling by plane. His smooth negotiation of the rituals of flying and airport procedure suggest a man in total control of his environment; the opposite, in effect, of most people’s experience of air travel. The scenes I have chosen should work particularly well as a way of eliciting all the stages of air travel from packing your bag to boarding your flight.

To get the students sharing ideas on the theme of air travel, show them the Martin Parr and William Egglestone photographs above, and get them to describe what they see, and also compare and contrast the two images. If you have a large group, you could give some students a separate pair of images to compare and contrast, such as these two further Martin Parr photos below. The first, of clealy exasperated passengers waiting to board their flight to or from Tenerife in 1993, makes an interesting counterpoint to the similarly densely-packed image beneath, the date and location of which I have not been able to identify (although I am fairly certain it is a Martin Parr photograph). The Tenerife picture has a particular resonance for me as I am quite certain I enjoyed very edition of Empire magazine featured in the photograph, with Kevin Costner on the cover. 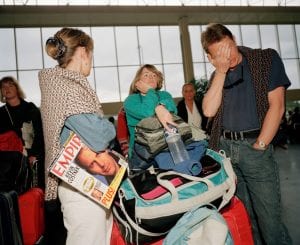 Show your students the first clip from Midnight Express. Have them share their observations in pairs or small groups, providing general gist questions to guide them (i.e., where? who? when? what happens? what do they think will happen next?). Once they have had time to share their ideas, solicit suggestions from the whole class, noting down useful vocab for all to see.

Show students the second part of the clip, once again asking them to describe the scene, guiding them with a few gist questions:

Tell the students they are going to watch another clip from the second film. They could do this as homework if you don’t have time in class. This time, provide them with some questions to answer in small groups/pairs or to consider at home if needed:

You could do one or more of the follow-up tasks with students: