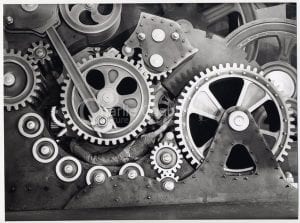 I have to thank Kieran Donaghy at Film English once again for alerting me to this clever and biting animation The Employment by Santiago ‘Bou’ Grasso. In a darkly comic critique of our value system, people are seen fulfiling absurd everyday functions such as being a stand for a lamp, the legs of a table, or a place to keep keys for the central character, whom we see going about his daily routine and commuting to work. In an ultimately bleak vision of society, everyone is apparently someone else’s dogsbody, with the protagonist himself revealed not to be above this exploitation, ending his commute in an office building where he literally prepares to be someone’s doormat. Kieran structures his class around employment and jobs vocab, as well as the expression “to work as”. I would like to expand slightly on that by comparing the representation of working life in The Employment with other darkly comic interpretations from cinema.

Not for the first time, I include here a clip from a Charlie Chaplin film, Modern Times (1936), to which I will no doubt return. The extract I have chosen from the silent classic is interesting in the way that it depicts what was, at the time, a relatively modern vision of the manufacturing process, with Chaplin struggling to keep up with the pace at the assembly line. This much-loved scene turns somewhat Orwellian as the hero’s break is cut short by a micro-managing director – who appears on-screen in the toilets to scold him for his tardiness and orders him back to work. It ends, of course, with the Chaplin’s Tramp being sucked into the machinery (see above) and being spat back out again.

I thought it would be interesting to compare these clips with a couple from Terry Gilliam’s cult dystopian sci-fi movie Brazil (1985),  which proves equally prescient in its vision of technology and surveillance in the workplace. It depicts a dehumanising bureaucracy in which the frantic workers are hindered by the distractions of on-screen entertainment (in this scene B-movie Westerns rather than social media). Rewatching clips from the film I am struck by the extent to which Brazil must have inspired the Coen brothers’ screwball comedy The Hudsucker Proxy (1994), the subject of one of my first posts.

A second Kafkaesque scene from Brazil sees the main character assigned, in a bleakly abritrary manner, a broom cupboard of an workspace in which he must apparently shuffle paperwork all day. His half-office reminded me of Spike Jonze’s surreal black comedy Being John Malkovich (1999) in which the main character, played by John Cusack, turns up at a job interview to discover that his new employer is located on the “seven and half floor”. The offices are literally only half the height of a normal working environment, meaning the employees have to double over to move (unconfortably) about. There is an edge of horror to the whole world shown, and Craig Schwartz’s exchange with the receptionist is also worth analyzing, if only at home, where the students can spend more time breaking down the dialogue.

Depending on whether you have used Kieran Donaghy’s lesson plan on The Employment, you might want to do some further brainstorming on what makes a good or a bad working enivronment. Here is to Santiago ‘Bou’ Grasso‘s The Employment again for your interest:

Show the students the first minute of the factory scene in the clip. Ask them to share their observations around the following themes/questions in pairs or small groups:

Once the students have shared their observations with each other, solicit suggestions from the whole class, noting down useful vocab for all to see.

Next, repeat the exercise with the rest of the clip, with some additional prompts, such as:

Tell the students they are going to watch a clip from a second film, and that they are to once again describe the working environment, employees and management. Also, ask them to discuss:

Tell the students they are going to watch a further clip from the Terry Gilliam film, and that they are to to describe in pairs/small groups:

Once students have had time to share their ideas, solicit suggestions from the whole class, noting down useful vocab for everyone to see.

Depending on time in class and how you want to structure the activity, you could add the fourth clip (from Spike Jonze’s Being John Malkovich, below). As understanding the dialogue might require closer attention, you could give this task as a homework. Either way, you should get the students to focus on general description and observation of the scene (who? what? where? when? why? how?),  get them to compare and contrast with the other clips (what is similar? what is different?), and get them to describe how the scene makes them feel.

Depending on the age group and/or context (business or general English), you could do one or more of the following tasks: