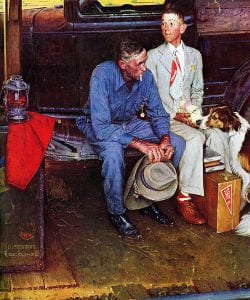 Ideas for a communicative English class about aspirations, regrets and changes in fortune

American painter and illustrator Norman Rockwell is a great source of inspiration for ESL and EFL classes. His works reflect many of the social concerns of his lifetime (1894–1978), notably the anxieties of a nation at war and racism, as this excellent class idea by Chrysa Papalazarou shows. Yet it is arguably for his vignettes of American family life that he is best known. As concerns lesson ideas, Rockwell’s works are particularly full of potential due to the stories they appear to suggest, and which the students can speculate upon and complete themselves. I was particularly struck by his 1954 piece Breaking Home Ties, above, which provided me with the final missing element for a class on hopes and dreams. The image and the class outline below would work nicely as a companion to my post on fatherhood, not to mention the themes of notalgia and regret explored in my posts on the stages of life and urbanization.

In Breaking Home Ties we see a young man waiting with his father. Their body language speaks volumes: the son is keen to embark on the adventure for which he is proudly dressed and that will presumably take him far away from his humble origins. His father, slouched and resigned, looks bleakly in the other direction. Presumably he has had a hand in his son’s reaching his potential, but must now let him go, perhaps sensitive to the knowledge that the gap between them – like the mutual silence in their final moments of togetherness – will surely grow. 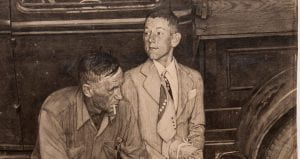 To continue on the theme of hopes and dreams, but also their inevitable byproducts – regrets and could-have-beens – I have chosen a celebrated sequence from the Pixar movie Up. In this sweet and rather sad montage we see the aspirations and disappointments of a couple throughout their life, from never quite managing to save enough to realise their dream home, to learning that they will not be able to have children. It is uncharacteristically sombre for a Hollywood animation, but by no means heavy-handed. Affording lots of opportunties for discussing how even the best-laid plans go astray, it is also an uncynical study of togetherness in the face of adversity.

A recent and relatively little-known song that would work with this theme is Robert Forster’s Life Has Turned a Page. Forster is perhaps no stranger to “could have beens”, having been singer in the Australian rock band Go-Betweens, one of those bands who were adored by critics for their run of albums in the 80s and (in their “comeback” period) 00s but were never hugely successful.

As a solo artist, Forster specializes in wry, bittersweet folk-pop. This year’s album Inferno, seems to reflect on some of these same regrets; one song, Remain, finds him admitting “I did my good work while knowing it wasn’t my time”. Better still, Life Has Turned a Page tells the story of a couple hitting the road in search of adventure only not to get very far at all, settling down in a small town by the sea and having a family. Later one of their children, a son, “bursts the cage” and moves away, and the couple themselves – now in older age – find that the small beach town has grown too large and busy for them, and go off seeking quieter refuge in retirement.

The class outline below would suit adult learners best but it might work with older teens.

Put the students in pairs or small groups and have them discuss and describe Norman Rockwell’s Breaking Home Ties. Simple gist questions/prompts should suffice (who? what? where? when? why? how? etc.)

Once they have shared their ideas, solicit suggestions from the whole class, noting down useful vocab for all to see. If the students don’t pick up on some of the nuances described above, you could do some further eliciting:

Tell the students they are going to watch the first minute and twenty seconds of an extract from a film and that they are to share their observations, focusing in particular on the couple’s:

Also ask them how the scene makes them feel and what they think happens next.

Once they have had a chance to share their ideas, solicit suggestions from the whole class, making a note of useful vocab.

Show the students the rest of the clip. You might want to stop it at 3’45” if you think that the death scene is too bleak for them. It is a children’s film though, so I wouldn’t worry too much. Try to get them to focus on the following:

If you want to do some further brainstorming about homemaking, you could do a similar exercise with this charming extract from Modern Times, in which Charlie Chaplin’s Tramp sets up house with an orphan girl (Paulette Goddard).

Before listening to Robert Forster’s Life Has Turned a Page, it might be useful to tell the students there are going to be three Australian towns mentioned: Noosa, Wurtulla and Byron Bay. Ask them to look them up on the web and determine how far apart they are and/or how different. This is important because the couple described in the song do not quite find the adventure and change of scenery they set out for when leaving their home town.

Give students the title of the song only. What do they think the song will be about? Have them discuss in small groups/pairs before holding a class discussion.

Have the students listen to the song without the lyrics, asking them the following:

Do a listening comprehension exercise. This could be a gap-fill (with or without the missing lyrics provided separately) or a jigsaw text. You can choose what language to focus on: rhyming words, irregular verbs (grew/grown, left, built, burst etc.) or more general comprehension related to the lexical field of life stages and passing time.

They left Noosa in ’72
To see the world the way some people do
See the mountains and the ice
Get to Byron Bay wouldn’t that be so nice
But she got pregnant and he could earn a wage
They’d just left Noosa, life had turned a page

Once students have shared their answers and you have reviewed them as a class. Have students discuss further the story described in the song. If necessary, elicit some ideas about some of the more idiomatic/poetic language, notably:

Here are a few suggestions for folow-up tasks. You could give different projects to different groups:

2 thoughts on “Hopes and dreams and could have beens”