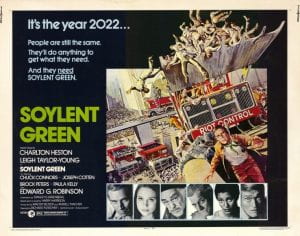 With the Extinction Rebellion currently raging in London, and Brits proving they have a taste for protest and civil disobedience after all, it seems the right time to post a class on the environment and particularly the unsustainable pillaging of world resources. Clearly it is a subject that warrants more than a cursory one-off class, but I thought I’d share a few clips that might generate some interesting discussion and help build vocabulary.

Seth Boydon‘s animated short film An Object at Rest charts the progress of a rock over thousands of years, largely unbothered until the dawn of man. The film is interesting as it is good way of eliciting structures around fabrication and repurposing (i.e., “made (out) of/made into”, “turned into”, “used as” etc.). It is not only a commentary on human transformation of the landscape but also mankind’s propensity for technological evolution and warfare. Its weary protagonist, an ever-diminishing rock buffeted from one situation and purpose to another, appears largely fatigued by the insatiable human appetite for economic progress.

Watching this charming and uncynical animation I was reminded of a highly prescient work of science fiction from the 1970s called Soylent Green. In this classic dystopia starring Charlton Heston, the world’s resources are dangerously stretched by overpopulation and climate change; its economies wracked by unemployment and unrest. The only nourishment to be found is supplied by one company, the Soylent Corporation, which produces the eponymous foodstuff: an industrialized, plankton-based product, itself scarce and stingingly rationed. 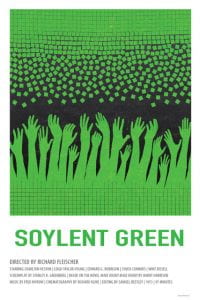 Soylent Green’s vision of the future might have been seen as quite outlandish at the time of release (1973), or when the novel it was based on – Make Room! Make Room! – was published (1966). Yet despite the somewhat dated effects, the film is more relevant now than ever. Incidentally, the film sets its action in 2022, while the novel was less conservative in its estimates, the 1999 premise lending its plot a fin-de-siècle pessimism.

The brilliant opening sequence shows the rapid transformation of the United States from the arrival of European farmer-settlers to the emergence of vast megatropolises, via the arrival of the automobile. It is a sequence that I ought to have used in tandem with – or instead of – the Bladerunner clip in my post on urbanization. If you wish to spend more time focusing on the world represented in Soylent Green there are some evocative clips with limited dialogue to work from on Youtube, notably this one of a New York marketplace which erupts in rioting when the police try to clear crowds queuing for the eponymous foodstuff.

Although very different in tone and style, the two films both evoke similar issues related to the exploitation of natural resources over a large time-frame. I have decided to use Soylent Green more as a warm-up so as to focus on the creative possibilities afforded by An Object at Rest – namely that the students invent their own story of an object or material through time, as a way to practice the aforementioned target language.

I haven’t added a song to this lesson plan, although Soylent Green is a handy reminder that environmentalism has been present in popular culture for at least 45 years. Marvin Gaye’s Mercy Mercy Me (The Ecology) or Joni Mitchell’s Big Yellow Taxi date from around the time of Richard Fleischer’s sci-fi thriller, and might interest higher level students if you are looking to extend the theme.

The animation An Object at Rest and related creative activity might also suit younger learners, although the themes explored in Soylent Green are arguably more adult. Feel free to adapt as appropriate.

For a warm-up, show students the first 40 seconds of the Soylent Green opening. Have them share their observations around simple “gist” questions (who? what? where? when? etc.) in small groups/pairs. Tell them the clip is from a film and that they are to predict what kind of film it will be.

Once students have shared their observations, solicit ideas from the whole class, noting down useful vocab for all to see.

Once the students have shared their ideas, you could reveal the true nature of the film, or better yet give them 5 minutes to research the film and plot to summarize for the class thereafter. The most important thing is to have built up a useful bank of vocabulary and concepts related to the environment and its exploitation – vital for the next phase.

Watch the first 40 seconds approx. and have students share their observations around simple “gist” questions (who? what? where? when? etc.) before asking the students to predict what might happen next.

Once students have had time to share their observations in small groups/pairs, solicit suggestions from the whole class, noting down vocab for all to see.

Play the rest of the clip. In order to focus the students on the target language, ask them to make notes on the following:

2 thoughts on “The exploitation of natural resources”