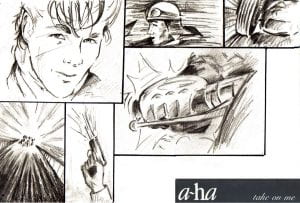 I’m a big fan of portals into other dimensions. Watching the David Lynch/Mark Frost television series Twin Peaks on BBC2 in my second year of secondary school was something of a gateway drug – if you’ll pardon the pun – to all manner of strange and surreal culture. Dale Cooper’s final disappearance into the Black Lodge, a kind of purgatorial antechamber peopled by backwards-speaking dwarves and taciturn giants, tapped into a long tradition of portals into other realms, notably in children’s literature, horror and science fiction.

I was looking into classic pop videos recently for class ideas and one much-parodied pop classic contains its very own portal. The video to A-ha’s 80s hit Take on Me inexplicably – for it bears no relation to the song lyrics – features a young woman being sucked into a comic book she is reading at a café, and finds herself caught between two worlds. She becomes ensconced in a bizarre chase sequence as the hero of the comic – also A-ha’s lead singer – seeks to escape the clutches of illustrated motorbike-race rivals bent on doing him harm. 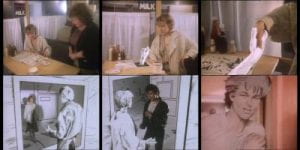 The video is much parodied, as this Family Guy scene attests, while someone has gone to the trouble of creating a “literal” version of the song, in which the lyrics have somehow been transformed so as to actually reflect what is happening in the video, to amusing effect. The story behind the original track and its slow progress up the charts, as well as A-ha’s subsequent refusal to play the fame game, is an interesting read.

More interesting still is the work of Michael Patterson, whose iconic pencil-sketch animation style had a large role in the video and song’s success. This article about the making of the video turned me on Patterson’s work, and his stunning but intense early short Commuter, that led to the artist being hired for the A-ha job. Commuter‘s flickering, sketchy graphics form an oppressive vision of working life in large cities – a chaos of noise, traffic and dehumanising architecture. It’s a stunning but claustrophobic work.

Portals and comic strips more generally seem a great way to have students use prepositions, and particularly prepositions of movement, in a creative way. The class outline below uses Take on Me as a means of eliciting and brainstorming such language while the students can bring their new skills to bear on Commuter, imagining a portal of escape for the eponymous office worker.

With the creative pop video theme this should work well with younger as well as adult learners, from secondary school onwards.

To get the students thinking and speaking in English, show them the following extracts (and/or the one at the top of this post) of the comic book shown in the A-ha video. Put them in pairs/small groups and ask them to describe what they see and see if they can predict/imagine a story. Make it clear that there are no wrong or right answers and that they are to use their imagination. When they have finished, solicit suggestions from the whole class and note down useful vocab for all to see. 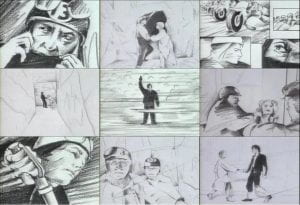 Tell the students that the comic book extracts they have been looking at are from a famous pop video. Show them the first 50 seconds approx., and have them share their observations in small groups around simple gist questions (who? what? where? when? etc.). Get them also to predict what happens next.

Once the students have shared their ideas with each other and then the whole class, have them watch the rest of the clip. Have them once again make notes and share observations around the following prompts:

While soliciting suggestions from the whole class, make sure that the students are using the correct prepositions (run through, run away from, come out of, climb into etc.). If they struggle, there are some excellent picture-based resources online, like this for example, to help them.

You may need to play the video a couple of times for the students to help them in this task. What may not be immediately obvious, for example, is that the hero and heroine find themselves running through a tunnel formed when the waitress screws up the comic and puts it in the bin.

Don’t forget to elicit the idea of a portal. It is, after all, by tearing a hole in the wall that the two protagonists manage to escape back into “reality”.

Tell the students that they are going to watch an extract of a short film by the same artist – Michael Patterson – who did the artwork for the video. Show them the first 3 minutes approx. and once again get them to share their impressions around simple gist questions:

As most students are likely to agree that the film is oppressive and claustrophobic, tell them that they are going to imagine what happens next, taking inspiration from the escape scene in the A-ha video. In small groups, they should prepare and present a rough storyboard and narrative, using as many of the prepositions of movement as possible. They are allowed to be as imaginative as they want.