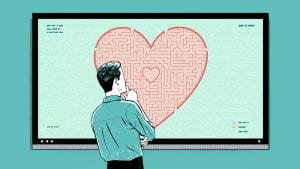 Communicative English class about romance and smartphone app obsession, based on short film 97%

One of my favourite films of the last ten years or so is Spike Jonze’s Her (2013). It is at once science fiction and science present, with many of its ideas about artificial intelligence and its effect on relationships already seeming quite plausible. What I feel is the strength of Her is its uncynical view of love in the digital age. A dystopia it may be, but it is neither judgemental or preachy.

I have long thought about how I could structure a clip-based class around a scene from Her but could never find the right clip. The ones already available for distribution online tend to be quite wordy and thus not really the kind I prefer to use for stimulating discussion and creativity in the ELT classroom. I had spent some hours trying to find a clip that cleverly evokes similar ideas to that of Her but without great success. Many of the short films I found were either too didactic in the delivery of their message, or of limited aesthetic interest.

Then I did one of those shot-in-the-dark Google searches that delivers exactly what you are looking for, and I fell upon this thoughfully-curated post on Quora entitled What are the best short films about social media? by Jeremy Ratzlaff. There are some really interesting films here, some dark and others more humourous – notably my favourite 97%. 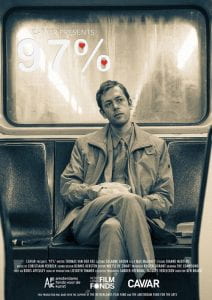 97% is particularly interesting as it uses comedy and an imaginative visual style to carry its message about the limitations and manipulations of social media, but without being too “on-the-nose”, as Ratzlaff calls it. Largely dialogue-free, it tells its story with economy and a series of comic twists which I hoped to exploit in class. A cursory glance at Kieran Donaghy’s pioneering Film English website deflated me somewhat, as I realized he had already put together a really lovely class on 97%. On the bright side, he had taken a rather different approach to the one I had envisaged, so I’m sure he won’t mind if I elaborate on that here.

This class could be an extension on my class about virtual reality and particularly the trailer for the film Brainstorm used in that post. It would suit older teenagers and adults.

To engage students and elicit useful vocab for the clip analysis, put them in pairs/small groups and show them the images below, as well as the one above, and ask them to describe them (who? what? where? why? etc.). They should also compare and contrast them: what are their differences and similarities in terms of message? 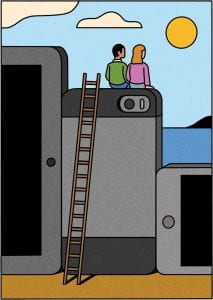 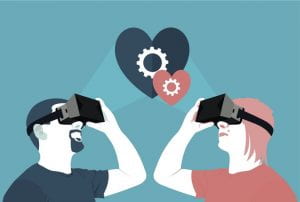 [I apologize for not having artist credits for these images, please contact me if you know who owns copyright for them]

Once the students have had time to share their ideas, solicit suggestions from the whole class, noting down useful vocab for all to see.

Tell students they are going to watch a film called 97%, which is linked to the theme from the warm up. Hold a quick class discussion. Can they predict what it is going to be about?

Show students the first 1’25”, leaving the screen on pause when there is a close-up of the man’s phone and the dating app which says “We Found a 97% LoveMatch nearby!” Before showing the clip, ask the pairs/groups to focus on the following gist questions/prompts:

Watch until 3’15” and repeat the exercise:

Watch until 5’30” and repeat the exercise:

Watch the rest of the film:

You could do one or a combination of the following tasks, or have different groups work on different projects: