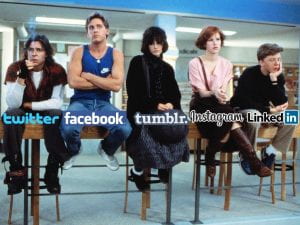 ESL-EFL class about teenage peer pressure and personality types, based on clips from The Breakfast Club

I’m going to put my cards on the table here and confess to a not-so-guilty pleasure: The Breakfast Club. John Hughes’s 1985 high-school comedy-drama is by a long distance the film I have seen the most times. If I were to guess I would reckon I’ve watched it on over 30 occasions. The film was a great comfort to me in my teenage years when I probably bunked off school to watch it, but I was first introduced to it by my older brother when I was still in primary school and have revisited it more recently on DVD.

This is not to say it is my favourite film. After all, The Breakfast Club is certainly not perfect. There are some good reasons to be cross about the way it ends. It could be argued that the film finally undermines all the questions it asks about the tribal nature of adolescence, class and peer pressure. Brian reiterates his role as “brain” (i.e., “geek”) by taking on the sole responsibility of writing the assignment given to them all. “Basket case” Allison gets a mainstream makeover at the hands of spoilt Claire – her Cinderella-esque transformation from goth to “princess” sparking romantic interest from “jock” Andrew. Not right at all! 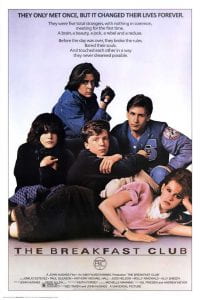 Nevertheless, the film – which unfolds like a play, most of its drama occurring in the library where the protagonists must spend their Saturday detention – has some genuinely affecting scenes, and explores issues as diverse as suicide, parental pressure and indifference, abuse, divorce, bullying, rejection and so on.

Amusingly the film seems to be enjoying a renaissance as a popular social media neme. The fact that each character is supposed to represent a different high school social group (a “brain”, an “athlete”, a “basket case”, a “princess”, and a “criminal”) has been harnessed by those seeking to categorize five things, whether it be different social media (see the top of this post) or the different suburbs in their home city. There is a meme generator dedicated to this exact purpose.

In any case, despite the wordy nature of the film – which gradually takes on the character of a group therapy session – there seems to be plenty of potential in the film for building vocabularly and sparking discussion on the theme of peer pressure, personality types and – for a third “p”! – pigeonholing (i.e., the way young people in particular might feel typecast in a particular role.

There are many resources online about the film, including this exhaustive “Study Guide” which explores the main themes and characters in great detail. My lesson plan below does not aim for anything nearly so complete, but there is plenty of potential there for follow-up tasks if you wish to extend the theme.

Realistically this would suit upper-intermediate and advanced learners of high-school age onwards. Despite the theme, it could interest adults too.

In pairs, have the students brainstorm the different parts of a school (facilities, buildings, rooms etc.).

After they have shared their ideas with the whole class, and you have noted down the vocab for all to see, show them the first 1’15” of the opening scene with no sound and have the students check which of the places from the brainstorm they saw in the clip, and to share any other observations about the school shown. They can also predict what they think the film will be about.

[NB: You could also use the David Bowie quote at the beginning, and the voiceover, but at this stage it is better to concentrate on visual information only].

Show the students the rest of the clip. Ask them to share their obervations in small groups/pairs, using the following question prompts:

[As the dialogue might not be easily understandable, even for upper-intermediate or advanced students, the idea here is for the students to share their global impressions about the characters, and not be alarmed if they don’t follow everything that is said]

Once the students have shared their ideas in pairs/groups, solicit suggestions from the whole class, noting down vocab for all to see.

Next, show them the clip again and tell them that the dialogues feature the following three lines, but they have to listen again for which conversation each extract belongs to:

Also, ask them if they learn anything more about the characters, their reasons for being there, and their parental relations, from a second viewing. Be sure to elicit the fact that the characters are there for a Saturday detention, and that they are being punished for various forms of bad behaviour.

Tell the students that they are going to watch another clip from the film. If you have not elicited it already, get the students to write the protagonists’ names down: Claire, Allison, Brian, Andrew and John.

Have students watch the scene and make notes about the characters based on the following prompts:

[Tell the students they might not understand all the dialogue, and that they are to concentrate on generalities]

Once students have discussed their ideas, solicit suggestions from the whole class, building up a profile for each character.

As a follow-up discussion, have students discuss the following questions in pairs/small groups:

You could give one or more of the following tasks:

Dear Mr. Vernon, we accept the fact that we had to sacrifice a whole Saturday in detention for whatever it was we did wrong. And what we did was wrong. But we think you’re crazy to make us write an essay telling you who we think we are. What do you care? You see us as you want to see us… In the simplest terms, in the most convenient definitions. You see us as a brain, an athlete, a basket case, a princess, and a criminal. Correct? That’s the way we saw each other at 7 o’clock this morning. We were brainwashed.

If you feel your students need extra resources to help describe the characters, there are plenty online, for example: