I have written extensively on the British playwright, author and screenwriter Dennis Potter. The Singing Detective was one of the primary works studied in my PhD thesis (in French) on revisionist “metaphysical” detective stories in British literature, film and television. I also wrote this article on the same series for the journal Coup de théâtre, this time in English, on the Renewal of the Crime Play on the Contemporary Anglophone Stage. The Singing Detective was not, of course, a play, but Potter cut his teeth as a “dramatist” in the now mostly-forgotten television play of the 1960s and 70s, a hybrid form that was eventually cannibalized by British cinema and television drama series in the 1980s.

Dreamchild is based on an earlier television play by Dennis Potter from 1965 called Alice, and describes Lewis Carroll’s unhealthy real-life obsession for the eponymous child, whose family the writer befriends. For a fascinating comparative study of the play and film, check out this excellent post.

In Dreamchild, Alice ultimately becomes an unwitting muse for Carroll’s surreal children’s story, and the memory of their strange friendship comes to haunt her in later life. The starting point for the film is the elderly Alice’s depression-era trip to New York to collect an honorary degree from Columbia University, a true event. American media interest in her story provokes a series of reminiscences hinting a more sinister dimension to her friendship with Carroll.

It is a curious movie that – as shown in the extract above – mixes reality and memory with fantasy sequences drawing on Alice in Wonderland and featuring Jim Henson puppetry. Henson’s creatures are fittingly grotesque, and give those scenes a nightmarish quality not dissimilar to that seen in his psychedelic children’s film The Dark Crystal, one of my first cinema experiences and an unsurprisingly discomfiting one. The caterpillar in Dreamchild in particular could be something out of a John Carpenter movie.

That Dreamchild was a flop is no surprise; it is small wonder the film was difficult to market given its troubling connotations. Jim Henson puppets and paedophilia is what you might call a hard sell! Meanwhile the scenes depicting the childhood Alice’s interactions with Carroll have something of Picnic at Hanging Rock’s languid, dreamlike Victoriana, as well as its sinister undertones. Those pertaining to the movie’s present day, however, suffer somewhat from overwhelming TV movie vibes, something I had difficulty shaking off. 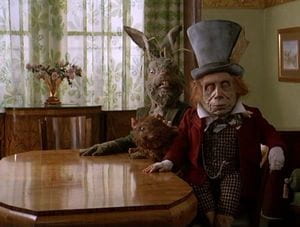 If Dreamchild doesn’t have quite the sinister edge of Potter’s best work for television, one can speculate that some of the confusion about what kind of film this should be has infected it at the level of style. Yet there are some clever segues between worlds and the ending is satisfyingly inconclusive.

Elsewhere the romance between Alice’s orphan maid Lucy and an American reporter-turned-publicity agent adds little to the film. The former’s oddly stilted and childlike diction is grating. One almost wonders if it is intentional: is this meant to echo in some way the relationship between Carroll and Alice?

Otherwise fans of Dennis Potter will find many nods back to his oeuvre. The dramatist is credited as writer and executive producer, while director Gavin Miller had previous experience bringing his plays to screen. Lifelong creative partner Kenneth Trodd also co-produces. Legend has it, however, that there were disputes between the director and Potter, with the latter asserting some authorial control over the final edits to Miller’s annoyance.

In any event, the languorous big band scenes showcasing the music of the 1930s instantly recall Potter’s earlier work, albeit without the illusory lip-synching sequences for which he is often remembered. Elsewhere we find further evidence of the writer’s preoccupation with the process of writing fiction, as well as a metafictional concern with illusion-making – especially in the scenes in which Alice is compelled to read extracts from Carroll’s novel for broadcast, the sound-effects men providing the atmospherics. Another Potter obsession surfaces, the sometime casual cruelty of children: in this case Alice’s laughing at Carroll’s speech impediment.

Moreover, it is an interesting film if only for its relative obscurity. Potter’s late forays into cinema are generally thought to have been failures when compared to his television work. I have some disturbing memories of the Nic Roeg-directed Track 29, a film I’d like to rewatch but I fear might not live up to its thrilling potential (Roeg and Potter, together, on one film!). I cannot bring myself to watch the Hollywood remake of Pennies from Heaven, adapted by Potter himself (and a painful experience for all involved), nor the recent adaptation of The Singing Detective starring Robert Downey Jr. If anyone wants to make a positive case for either, feel free to let me know below.