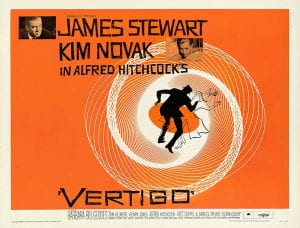 (1) the defeated sleuth, whether he be anarmchair detective or a private eye; (2) the world, city, or text as labyrinth; (3) the purloined letter, embedded text, mise en abyme, textual constraint, or text as object; (4) the ambiguity, ubiquity, eerie meaningfulness, or sheer meaninglessness of clues and evidence; (5) the missing person, the “man of the crowd,” the double, and the lost, stolen, or exchanged identity; and (6) the absence, falseness, circularity, or self-defeating nature of any kind of closure to the investigation.

“Metaphysical” is something of a misnomer, since not all such narratives seem to dwell on issues relating to being or identity as such. In literary manifestations of the genre, the aforementioned tropes are often used to undermine the ontology of the text, in a kind of metatextual game, rather than concerning themselves with great questions of human knowledge and existence (even if for some novelists, particularly the postmodernists or their forefathers, the former necessarily entails the latter). “Metafictional” often seems therefore more pertinent, but the metaphysical detective label has nevertheless stuck and become a handy shorthand.

Somewhat less attention has been paid to so-called metaphysical detective stories in visual media, even if Merivale and Sweeney find time to mention Alan Parker’s Angel Heart and Dennis Potter’s television series The Singing Detective, the latter of which featured heavily in my own doctoral study. In television they might have also cited Twin Peaks, which – like Angel Heart – features a “defeated sleuth” and the trope of “lost, stolen, or exchanged identity”.

In cinema, there are fewer explicit examples of the form. Yet you could make the case for a number of films in which the investigating figure becomes inexorably drawn into the mystery in a way that raises questions about their own identity. I’ve mentioned this aspect to some of my favourite films before, notably Rear Window, Blow Up and The Conversation. Another would be the neo-noir sci-fi classic Bladerunner, in which the “metaphysical” is pushed to the forefront: questions about what constitutes sentience dominate the narrative, and the viewer is ultimately left with some ambiguity about the true identity of its detective-hero Deckard.

Another of my favourite films which could be viewed as a metaphysical detective story is Hitchcock’s Vertigo. There is a great deal to be said about Vertigo which I couldn’t begin to touch upon here. One possibly unwitting (but no less pertinent) interpretation of the film is that it is feminist in its sensibilities and a deconstruction of the male gaze. I say ‘unwitting’ because Hitchcock was, by all accounts, a notorious misogynist. Oddly, the film did not even figure highly among the director’s appraisals of his own work. 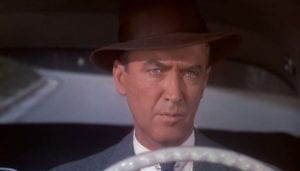 And yet, as filmmaker James Devereaux writes in this fascinating blog post, Kim Novak saw in the script echoes of her own treatment at the hands of Hollywood producers who wanted to impose an identity upon her, much as industrialist Gavin Elster and, tragically, retired detective Scotty (Jimmy Stewart) do in the film. This chimes with my own reading of the film, which I see as partly one of role-playing: of the roles that we inhabit, willingly or unwillingly. In any case, the gaze – male or otherwise – is important to this interpretation. After all, Vertigo is a film about a man tricked profoundly by an illusion (and what is the cinema, after all, but illusion?). This obsession blinds him to the roles he unwittingly assumes: that of witness and then, later, murderer. I’ll explain …

Unlike Rear Window, in which photographer Jeff’s (also Jimmy Stewart) voyeurism seems to will – or even project – the mystery into life, in Vertigo the mystery is invented for the hero by a third party. In a plot that by any reckoning is entirely implausible, a master fraudster and murderer (Gavin Elster) has his retired detective friend (Scotty) trail someone pretending to be his wife (Madeleine). Elster’s plan is to persuade Scotty that “Madeleine” believes she has been possessed by the spirit of her great-grandmother, Carlotta Valdes. The fake Madeleine is to have Scotty follow her up into a clock tower knowing, due to his acrophobia, he will not be able to reach the top and save her from apparent suicide. Of course, it transpires that Elster has thrown the real Madeleine off the tower and Scotty, unable to scale its full height, is convinced she took her own life. 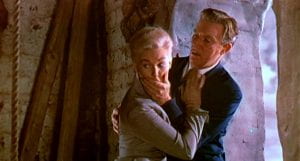 What makes Vertigo so powerful and unsettling is the vertiginous circularity that echoes throughout the film, from Scotty’s acrophobia and the close-ups on Madeleine and Carlotta Valdes’s hair, to Bernard Hermann’s score and the rings of the cross-section of the Giant redwood trees they visit. Everything spirals with a dreadful inevitability. 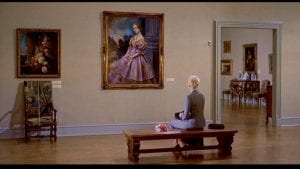 What gives the film its metafictional dimension is the fact that Scotty – like the James Stewart character in Rear Window – has been immobilized by his condition, he is a spectator forced to witness an elaborate and implausible fiction. He falls in love with someone who is pretending to be a woman possessed by someone else, and when he believes her dead becomes haunted by the same fictional ghost (see trope 5: “the double, and the lost, stolen, or exchanged identity”).

When he finds Judy Barton, the woman Elster hired to pretend to be his wife, he recognizes her but believes her a different woman. However, still haunted by his inability to halt Madeleine’s apparent suicide, he remakes her, forcing Judy to change her hair and clothes so that the fictional Madeleine comes back to life (the aspect of the script that apparently resonated so much with Kim Novak).

In the famous scene in which Judy steps out of the hotel bathroom wearing the necklace that completes her reincarnation as Madeleine, she appears bathed in a green-ish light as if part-apparition, part-manifestation of the material world to which she belongs (the material property of men). The unusual lighting (purportedly from neon sign outside) also points metafictionally to the illusory quality of representation: Madeleine appears as if projected on screen. Meanwhile, the green neon is an echo of the dress she was wearing when Scotty first saw her at a restaurant, in a situation that was entirely stage-managed for his benefit.

Maddie almost literally emerges here as smoke and mirrors, the latter of which feature predominantly in the film as a reminder of Madeleine’s duplicitous (or doppleganger) status, of the illusory quality of female beauty as prescribed by male desire, and of the reflective, repetitive structure of the narrative. 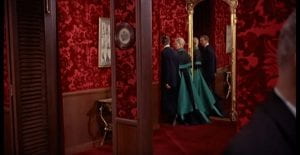 In the virtuoso hotel room scene, of course, he realizes that Judy and Madeleine are one and the same. Their kiss subsequently transports him back to the illusory scenario created by Elster, the camera encircling Maddie and Scottie before returning them to the present. A wall between one fictive world another is breached, if you like, and he drags her back to the scene of her death, with dreadful inevitability and circularity (trope 6), to reconstruct the scene of the crime. As in David Fincher’s Se7en, Scotty virtually becomes murderer himself in a perfect crime orchestrated by someone else, and, in driving Judy to death, kills the only person who could corroborate his version of events. Although the ending provides a closure of sorts to the narrative, it also represents the ultimate defeat to the detective figure (trope 1). 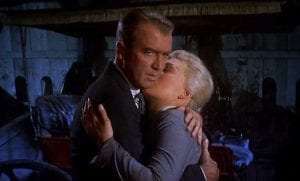 Interestingly, rather than hold back the knowledge of Judy’s complicity in the original crime from the viewer, Hitchcock lets us into the secret early, changing the focus of the film’s discourse from murder mystery to male emasculation and obsession. Scotty is doomed to let events tragically repeat themselves, because he cannot accept that he had unwittingly played a role in someone else’s fiction.

Ultimately, the metafictional interpretation casts Elster as a master of illusion. He is like a author or director who has cast fictional roles for Scotty and Judy, of which neither are entirely cognisant. Scotty’s rage at being cast as mere spectator in the original tragedy impels him to pursue a deadly restaging. In the true metaphysical detective mould, he dooms himself to repeat Elster’s murderous act, this time on a woman he loves. Worst still, the object of this affection does not really exist, but is an actress of sorts playing a role for him alone.

Curiously, the portrait of Carlotta Valdes is authentic, but was since lost by the gallery in which it appears (the Legion of Honor art museum in San Francisco). That Gavin Elster should, in the film, spin a fiction around this painting creates a strange mise en abyme (trope 3) echoed in the renactment of the tragedy at the clock tower: life imitating fiction imitating art imitating life, and so on. Furthermore, Judy’s final fall from the clock tower is precipitated by fear of a shadow which turns out to be a real-life nun but we can assume she believed to be a ghost (either Elster’s wife, or Carlotta Valdes, or both – it doesn’t matter).