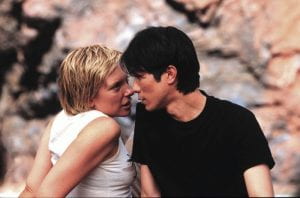 It has been a long time since I blogged and I felt the need to get back in the saddle. Although the pressures of work and family life in the age of Covid have kept me away from Visual Language, I have been nonetheless been writing, but mostly film reviews of varying depth over on Letterboxd. I have also been using that site to archive some old Amazon reviews that have fallen into obscurity. At some point, I may polish up some of the more recent ones and post them here.

One film I like very much and have recently rewatched is Sue Brooks’ 2003 movie Japanese Story, starring Toni Collette and Gotaro Tsunashima (see above). Set in Western Australia, it is a love story-cum-survival film about the relationship that develops between an Australian woman and a visiting Japanese businessman she is chaperoning on a visit to mines in the Pilbara desert. I do not remember if I ever reviewed this film and cannot find it on my deep dives into my Amazon profile: I will try to do so next time I watch it in full. Suffice to say here that it is a striking and memorably moving film that does not comfortably conform to expectations.

What did grab me the last time I saw Japanese Story, and the reason I have returned to it in my language teaching, is an early scene in the movie when the two protagonists meet. It is a proverbial car crash of intercultural communication breakdown. Both are partly to blame for the ensuing awkwardness, but it might not surprise you to learn (if you were are paying attention) that they finally overcome it. Here it is:

The quality is not great (I took it directly from Youtube) but I find that my adult learners nevertheless respond well to the situation. I have worked with B2 students and upwards but I think it would work with B1 students too. Rather than write up a detailed lesson plan, I will sum-up my approach:

First, I try to begin with some kind of warm-up discussion about welcoming or having to receive foreign visitors, getting learners to share their experiences in small groups. Then, I show them roughly the first minute of the clip, getting them to try to make sense of the context with general gist questions (who? what? where? when? why? etc.) and predict what they think will happen next. Once they have shared their ideas in groups, and then with the whole class, I show them the rest of the clip, again asking them to note and share their observations around very general gist questions.

At this stage I tend to lead into a discussion about what either of the characters could have done to improve the situation, and about who is at fault for the awkwardness. I have not tried it, but you could also do some spontaneous role plays at this stage, with the learners putting themselves into a similar situation: perhaps following this up with some fine-tuning and brainstorming on the expressions they use if needed.

The video I follow up this clip with is an advert for Google that was broadcast during one of the recent Superbowls. It essentially posits a world in which the language and cultural barriers of Japanese Story vanish thanks to the translation apps on our smartphones which enable us (in theory, at least) to communicate with anyone in any language. Here it is:

As it is a short advert but quite dense in information, I normally play it twice, asking the students to again note and share their observations around simple gist questions (e.g., What is the clip about? What examples does it give? What message does it communicate? What is your opinion on that message? What is the link to the clip from Japanese Story? Etc.)? After that, get the students to share their observations and views on the clip before solicting suggestions from everybody.

Where you go from here is up to you. The most obvious task for me would be a formal debate around the following motion: “We do not need to learn languages any more because technology can do it for us”. Of course I disagree with this motion, and there are plenty of examples in the first clip of how communication is not simply about language, but a more complex system of codes. But it normally proves a stimulating and topical subject. Let me know how it goes in class for you!