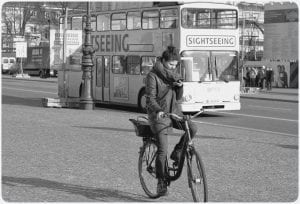 The picture above, I believe, was taken by Marc Davenant,  who is a professional photographer with a great Twitter account where he shares not only his own works but many by the greats of the medium. I thought the picture could work as part of a warm up to a class about smartphones, one that follows on from this one I did about “love in the digital age“. In that post I complained that I could not find the clip I was looking for from Spike Jonze’s 2013 movie Her, a dystopian sci-fi set in the near future about a man who falls in love with his “OS” (operating system). I am happy to report that the clip I could not source at that time has now surfaced on the web.

I was also inspired to revist the theme by Kieran Donaghy’s blogpost “The Seven Best Short Films for ELT Students” which had some excellent recommendations, not least Miles Crawford’s sweet little movie “I Forgot My Phone“. Along with the Spike Jonze clip, there is plenty to inspire discussion and debate in the ELT classroom.

For the warm-up, I suggest showing the above picture alongside the Seb Agresti’s evocative cartoon below (assuming you haven’t used it already) and get the students in groups discussing the pictures’ similarities and differences and asking them how the images make them feel. 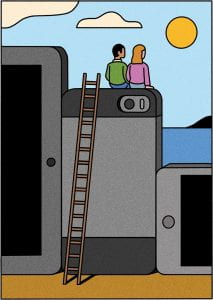 Before watching the movie it might be interesting to do some predictive work about the title and brainstorming. For instance, start by having the students, in groups, predict what they think the film will be about. Once you have solicited suggestions from the group you could also get them to brainstorm the different situations in which they use their phone, using their suggestions to make a list on the board.

Once this process is complete, you could round it off with a quick class discussion about how the clip makes them feel and if their understanding of the film’s title (“I forgot my phone”) had changed since watching the clip.

To further the discussion you could show them the clip from Her below, up to about 1’10”, and just get students to respond to some general gist questions in groups (who? what? where? when? why? How does the clip make you feel?).

Once you have solicited suggestions from the whole class and noted useful vocabulary, you could further the debate a little by asking the students to compare the two clips (similarities and differences).

This is the kind of class where I think it is best to take a more task-based approach and see what gaps in the students’ knowledge are shown through their contributions. Perhaps it would be useful in advance of the final task to look at different expressions for giving advice or making recommendations (modals like should/must, ought to, conditional sentences: what would you do? etc.)