Giulia Boschi as Aimée and Isaach de Bankolé as Protée

I’ve recently acquired an Artificial Eye Collection of Claire Denis movies. By no means an exhaustive anthology of her work – there are just four films (Chocolat, Nénette et Boni, Beau Travail and White Material) – it provides the introduction to her oeuvre I was hoping for. Having read a lot about Denis’s films, and long harbouring the suspicion that I have long overlooked her, I decided to have a binge. I should add that I have seen 2009’s White Material before and that, while I found it unsettling and beautifully photographed, I don’t think I quite gave it the attention it deserved.

Such was the impact of watching Denis’s 1988 breakthough film Chocolat (not to be confused with the 2000 abomination starring Juliette Binoche) yesterday evening, I awoke today with the impression that I had dreamt of it all night. Although not exactly a very objective form of criticism, I think it is fair to say that the film has been insidiously working on my subconsious.

What struck me most about Chocolat was how its elliptical, almost fragmentary style is achieved without tricksy editing or non-linear storytelling. Beyond the framing device of (the aptly-named) France Dalens’s return to the Cameroon of her childhood, which bookends memories of her family’s final days in the region, the story is told chronologically. Yet there is still much the spectator has to do to make sense of the narrative. 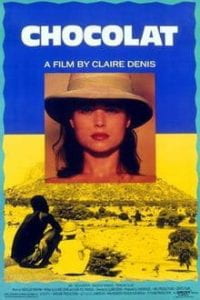 Events are often introduced fleetingly and patchily. Many reviewers have attributed this to the film’s perspective, which is told – even if not explicitly – from the perspective of the childhood France and the handsome “houseboy” Protée, with whom she enjoys an under-the-radar friendship and understanding. Both are watching figures, France from behind curtains literal and figurative, curious as children tend to be; Protée in his unacknowledged role as family protector.

Protée ensures the smooth running of the household of France’s parents, a regional colonial administrator and his elegant but haughty wife, Aimée. France’s father is often called away for his work, and Protée stands sentinel over the home, a friend and brother-like figure to the lonely little girl, an object of temptation to her mother. It is a temptation to which Protée is apparently drawn too, but it is ultimately he who has the strength of will not to yield to it, aware of the dangerous consequences of crossing such lines in French Colonial Africa.

The film is thus riven with tension, social and sexual. We sense that the colonial era is coming to an end, and racism is manifest throughout. Aimée, as her name suggests, is an object of desire for visiting men. Although Protée never shows his jealousy, he observes everything, and we sense he is willing to protect her from unwanted white suitors if necessary.

Protée breaks down memorably, once, in the outdoor shower reserved for the house’s domestic staff, when he is almost chanced upon naked by Aimée and France. For a character so composed and dignified, the effect is jarring. It is also ambiguous: are his tears related to his unrequited feelings, or frustration at having no private space of his own. Indeed, we learn that the servants sleep outside on the veranda. He can hide his emotions, but not his body.

The shower seems to have a recurring significance in the story. Aimée tells him at one point not to have a shower until the last minute before guests arrive for dinner, presumably so that he be as fresh and presentable for the occasion. In this instance the stagecraft is for a passing British civil servant that she hosts for the night while her husband is away, and who later attempts unsuccessfully to seduce her.

Her consciousness of Protée’s body and its aroma is a tacit acknowledgement of where her desires truly lie, even if she is perhaps unable at first to articulate it to herself. Separately Protée is asked to fill the water tank that serves as a shower for Aimée, and he is vexed at seeing the water run free so quickly and wastefully. Unlike for him, though, Aimée’s modesty is preserved.

The final shower scene is perhaps the most significant. Aimée’s husband agrees to host a French beatnik called Luc, who we learn is a serial seducer of other men’s wives. There is a suggestion that Luc is eyeing Aimée as his next conquest, and is also insinuating himself into the family via France, whom he begins teaching (implicitly replacing Protée, who had already assumed this role unofficially).

Although Luc initially seems liberated from the hierarchies of colonial France, his insistance in eating, sleeping and washing as the servants do is shown to be a form of self-aggrandisement. When using the servant’s outdoor shower, Protée mildly rebukes him, and Luc profits from the occasion to display his naked body to Aimée. Despite Luc’s pretentions of being an enlightened white man, he hides behind his skin colour whilst provoking others. The implication is that Protée could never do the same, a notion borne out by his later firing when he rejects Aimée’s advances.

Tensions between the two men mount when Luc publicly mocks what he perceives as Aimée and Protée’s mutal attraction. They later fight and, overpowered, a humiliated Luc leaves the house without word. Aimée, who seems to have heard the whole incident crouched in the dark of her bedroom, reaches out to touch Protée’s leg as he passes. His reaction is electric – he yanks her to her feet in a wordless but authoritative rebuke. Aimée later gets her husband to fire him.

Their brief physical contact is echoed towards the end of the central narrative when France visits Protée fixing a generator. She asks him whether the metal pipes are hot. Instead of answering he lays his hand on one and feigns indifference. The little girl does the same and instantly burns her hand. He too is then revealed to have done the same. It is both an act of revenge and a symbolic guesture: there are some physical lines that, if crossed, present dangers. 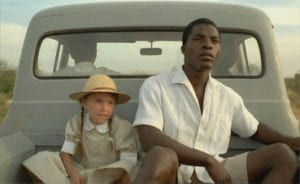 Above all the film is masterful for its framing. Not unlike the aforementioned narrative device, there are many frames within frames. Claire Denis has expressed her admiration for Yasujirō Ozu, and in its rhythm and composition this is particularly evident in Chocolat. This compositional quality is not only painterly, though, but evocative of the implicit boundaries of colonial society. As was often the case with Ozu, there is little in the way of camera panning, but what there is is thoughtful, probing, graceful. No shot feels frivolous or wasted – even if the discourse is often ambiguous.

Denis, who has drawn upon her personal experience in French colonial Africa in the making of Chocolat, has delivered a film which is nostalgic without being sentimental, reproving without being sensationalist. A work of subtle but insidious power – for a debut film, it must rank as one of the greats.