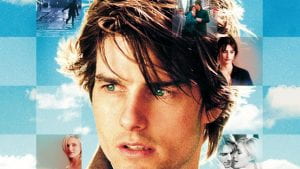 Normally I disapprove of Hollywood remakes, especially when the original film was (a) not a direct adaptation of a novel, (b) released only a few years earlier, and (c) a well-regarded foreign language movie. However, having never seen Alejandro Amenábar’s 1997 Spanish film Abre los ojos (Open Your Eyes), I feel entitled to review Cameron Crowe’s 2001 version starring Tom Cruise (who also produced) on its own terms. In fact I had seen it before, around the time of its release, but had only the vaguest recollections of the movie, and not wholly positive ones.

The second time around, though, and I admit I rather enjoyed it, if that’s the right word. It is quite a provocative film, with a handsome multi-millionaire hero with more than a touch of hubris about him. Heir to a publishing fortune, David Aames (Cruise) has no end of female admirers, and no compunction about turning the head of his best friend’s date, Sofia (in this case played by Penelope Cruz, who also featured in the original). This latter flirtation provokes his on-off girlfriend Julie, played by a menacingly unhinged Cameron Diaz, with tragic consequences.

Without wanting to give too much away (or indeed have to describe the intricacies of plot), there is a fair amount of uncertainty about the veracity of what we see. Beginning with a bad dream, it becomes increasingly hard to distinguish between reality and fantasy. In the final third the repeated undermining of spectatorial confidence almost pushed me away: it is hard to remain emotionally invested with such frequent segues. But I felt finally convinced.

The dystopian sci-fi dimension to the finale, which I believe might have left me cold on first viewing (a twist too far perhaps), worked better the second time round. While I might have seen its explicatory sequence, delivered by “Tech Support”, as a Nolan-esque coup de théâtre (“listen carefully as we tell you just how complicated this really is”), it resolves nothing. Rather than unpacking the film’s mysteries, it only reinforces them. Could not the final explanation just be a dream or wish fulfilment in itself?

The “Tech Support” character has something of the George Bailey’s Guardian Angel about him, although the celestial finale on a skyscraper rooftop is marred by the rather cheapo visuals. More than It’s a Wonderful Life (or even A Matter of Life and Death), I was reminded of Jacob’s Ladder (1990, another film about a near-death experience in which the protagonist’s subsequent life could be but a dream, albeit punctuated by nightmares. Vanilla Sky would make a nice triple bill with the Adrian Lyne movie and Michel Gondry’s Eternal Sunshine of the Spotless Mind (2004), sharing with the latter film an interest in the memory as an artefact that can be erased or manipulated. In this respect, I also thought of the less well-remembered (pardon the pun) sci-fi, Brainstorm (1983), starring Christopher Walken, which also deals with notions such as memory playback, virtual reality and near-death experience.

On a structural level, Vanilla Sky also recalls Dennis Potter’s seminal BBC television series The Singing Detective (1986), in which psychoanalytical sessions become a conduit into varying reminiscences. It also shares with that masterpiece the theme of disfigurement, as well as its play of dream, reality and “fiction”. This latter element adds another layer of metafictional uncertainty to Vanilla Sky. David Aames is a publishing magnate and his best friend an author. Could there be an element of fictitiousness to his predicament: as evidenced by a scene between them in the final third of the film in which the novelist ridicules a man at a listening table for stealing his lines.

I was also reminded of Dennis Potter’s swansong Cold Lazarus (1996), in which the cryogenically frozen mind of an author is reawakened in the distant future. Sound familiar? If so, one might question the reflex dismissal of Vanilla Sky on the basis of its being a remake and accept the deeper truth that all works have debts to others, conscious or not, and that what really matters is whether a given film (or any other artwork) is greater than a sum of its constituent parts. I would argue that case for the Cameron Crowe movie, with some caveats: namely the slightly shabby visuals at the end and the sometimes clumsy musical choices (as much as I like Radiohead, Spiritualized and REM, there are moments when the film starts to resemble a rock video).

I also confess (perhaps unfashionably) to an admiration for Tom Cruise, an actor who gets his hands dirty when the job requires it. I have always felt that there is a certain edge or darkness to Cruise that plays well when the character he is playing is more morally compromised. Vanilla Sky came during what was arguably his finest run: not long after 1999’s Magnolia and Eyes Wide Shut (another film that grew on me after the initial disappointment I felt on its release), and the year before another strong work of dystopian sci-fi, Minority Report (2002).

Some viewers seem to have found it difficult to empathize with a character (Aames) who is apparently not only stinking rich but irresistible to women. But I think this is missing the point: Aames is a man who has everything but did not earn his own success. Rather, he inherited it and then threw it all away. There is great pathos (for me) to his disfigurement and consequent bitterness; the nightclub scene in particular is painful to watch. You can only admire Cruise for, as on Born on the Fourth of July (1989), once again playing a character whose attempts to recover from massive physical trauma are not heroically dignified but messy and alienating to those close to him. As someone who has lived with the victim of severe cranial trauma, this was something that resonated strongly with me.