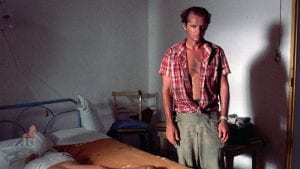 My late conversion to Michelangelo Antonioni’s Blow Up has had me checking out some of his other English-language films, including this slow-burning 1975 piece starring Jack Nicholson as a disaffected political reporter who has ostensibly reached the end of his personal road on a job in Saharan Africa. Returning to his hotel after a bitterly unsucessful day out in the desert, he siezes the chance to swap identities with a man named Robertson that he resembles and met only briefly the evening before, and whom he finds dead in his room unnoticed by the hotel staff.

Rather than just assume his new identity as means to escape his dissatisfactions, he finds himself drawn into the dead man’s life: fulfilling some of his appointments and becoming increasingly enmeshed in his affairs (it turns out that his new alias belongs to a gun smuggler of sorts). In plot terms, you might be reminded on one hand of North By Northwest, or The Talented Mr Ripley on the other. But this is above all an Atonioni film, and thus less concerned with the drama or mystery in itself (although The Passenger has a decent measure of these), and more with the overall sense of displacement and crisis of identity experienced by the protagonist. 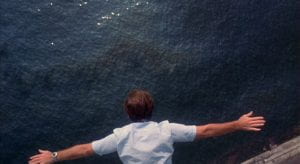 Dreams of escape in The Passenger

As with Blow Up, but for rather different reasons, Jack Nicholson’s David Locke makes for a slightly unappealing hero. Much admired for his political reporting, the character’s charms and acumen are rather less evident than one might hope to expect, not least as Nicholson’s charisma is very much on a leash here (more even than in, say, Five Easy Pieces). It is a modest, if even at times mechanical performance, but – in keeping with many explicitly auteur movies – the real star of the film here is Antonioni and his distinctive vision. But if Locke is a somewhat impenetratable (or, indeed, unlockable) individual, that perhaps chimes with the film’s – and the director’s – preoccupation with quests for identity. As with Blow Up, this probing of identity segues discretely into questions about reality and fiction, shedding doubt on the veracity of what we see without entirely undermining it.

It is difficult for me to articulate why I find Antonioni’s aesthetic so compelling. It would be easy to dismiss its longeurs and penchant for using recognizable but oddly empty tourist sites as pretentious. And yet, as in Blow Up, I feel that nothing is wasted: that we are being shown something with thought and care but still given space to produce our own interpretations. What is outside the frame, as with many great directors, is often as important as what is happening within it, as evidenced by the film’s extraordinary climax: a seven-minute tracking shot that passes incrementally through the bars of Locke’s hotel bedroom window while all the action takes place off screen. 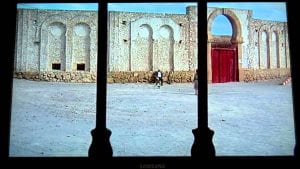 It is a shot that would test the patience of many and yet it is so strikingly singular and atmospheric it lingers in the memory long after. Like a long pan into a landscape painting, you can feel dusk slowly imbuing the scene much as the sun is setting on Locke’s life. I have deliberately not compromised my own interpretation of this enigmatic scene by reading those of other critics, but here are some initial reactions. For me the shot could be seen to symbolize on some level the soul’s departure from the body. In Locke’s case, it is perhaps not his soul as such but his identity which is at stake: so much so that (SPOILER ALERT) when he too is found dead by his wife at the end of this sequence, she does not recognize him. It is as if he has truly become the person whose identity he has taken.

Such an outlandish shot cannot fail to draw attention to itself. As much as one is absorbed by the beauty of it, and the action happening out of shot, one is also awed by the seamless passage of the camera through the bars of the window: Locke’s ultimate escape (or, indeed, the unlocking of the prison his life has become). But this appeal to the viewer to consider the technical implications of the scene chimes with other elements of film’s discourse. As in Blow Up, the questions of identity in The Passenger are also tied to a problematization of representation itself. A self-reflexive streak runs throughout the film, with excerpts of documentary footage purportedly produced by Locke inserted unannounced into the narrative, digressional tangents that throw the viewer of balance before being revealed as archive material of his work.

Metatextual questions of authorship are similarly raised when, in one such excerpt, Locke’s subject takes control of the interview and turns the camera back on him. In one the film’s other great scenes, Locke’s encounter with Robertson is reconstructed in a disorientating interplay between temporal levels (past and present) and, tellingly, Locke’s own recording of the conversation: again highlighting the mediated and constructed nature of all representation, be it documentary or cinema.

The Passenger is unashamedly arthouse but invites rewatching. As with Blow Up, there is an pervasive atmosphere of mystery that can be tantalizingly grasped but remains satisfyingly ambiguous.